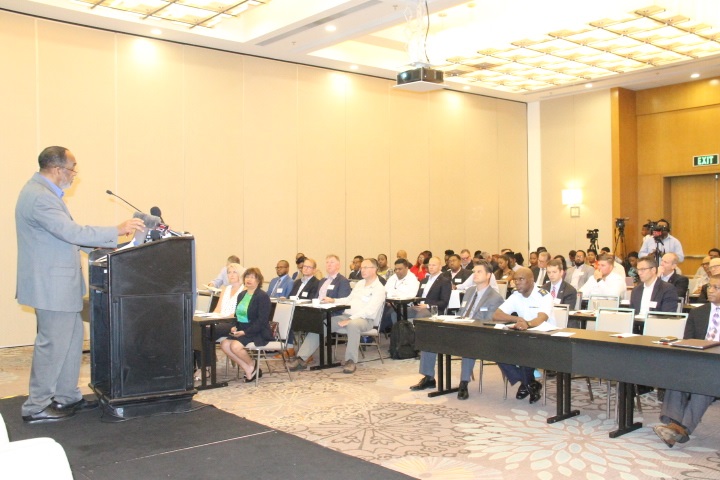 “Unfettered access to the site: There should be no prevention or stiff-arming of government employees or people who provide oversight to go on that rig at any time,” he said. Adams said the government officials would not interfere or interrupt the work. “We should not be prevented from visiting the sites at any time including unannounced visits,” he added.

He told a conference on “Enhancing Offshore Exploration and Production Regional Capacity: Operational and Environmental Safeguards” that while the EPA does not have the capacity to do 24-hour monitoring, it relies on companies to abide by safety operation rules in environmental permits after a “rigorous and comprehensive” environmental impact assessment. He said it was also in the interest of companies to operate safely or their image could be soiled easily.

“We have to trust also the operators and I guarantee the operators do not want for anything to happen. They know that if anything happens, their operations are going to be shut down and it’s also not (going to be good) for the economics of the company and also the branding of the company so you trust and you still have to verify and in the permits that we have been issuing for the offshore operations, I think we are very, very confident that the system we have in place and the regulations that we are imposing and the standards that we impose, we are pretty confident that they will operate safely,” he said.

Adams admitted that Guyana does not have its own standards, but instead adapt foreign ones and impose them on the contractors. He observed that the Civil Defence Commission (CDC) was leading a multi-agency oil response mechanism.

Talk about the need to avoid accidents, including oil spills, came the same day that the US-headquartered ExxonMobil and the London-based Tullow Oil announced two separate oil finds offshore Guyana.

The EPA Chief appealed for high ethical standards including legislation to bar people from leaving top government jobs and for immediately working with the contractors. He said government’s goal must always be to have better qualified and capable technical and other officials. “It’s going to take time especially from starting from where we are today,” he said.

Adams discouraged people from becoming complacent because of high safety records including no loss of man hours because there has been no incident or accident. He said profits should not be linked to production but also health, safety and environment. Adams cautioned against deviating from procedures because they do not understand or they believe that they know too much.

The EPA Chief said everyone down to the cleaners should have “stop work” authority without retaliation. “Those are the kinds of things that we have got to make sure that is implemented or is instituted,” he added.

Adams said even though companies would have the best design, procedures, codes, training and the best plans, there is the “human factor”. “The one thing that we do not cater for, (to) pay attention to is the human factor…. that we have to pay attention to. Everyone of us, we come to work and something may have happened before and we lose concentration,” the EPA Executive Director said.

The EPA, he said, has just established a “dedicated” oil and gas unit with the assistance of the Ministry of the Presidency’s Department of Energy and support of the World Bank. Oil companies, he hoped, would also provide their facilities’ information to the unit.

Previous: ExxonMobil says interim permit for chemical warehouse was too risky
Next: US hails Guyana’s support in Venezuela’s crisis