ExxonMobil says interim permit for chemical warehouse was too risky 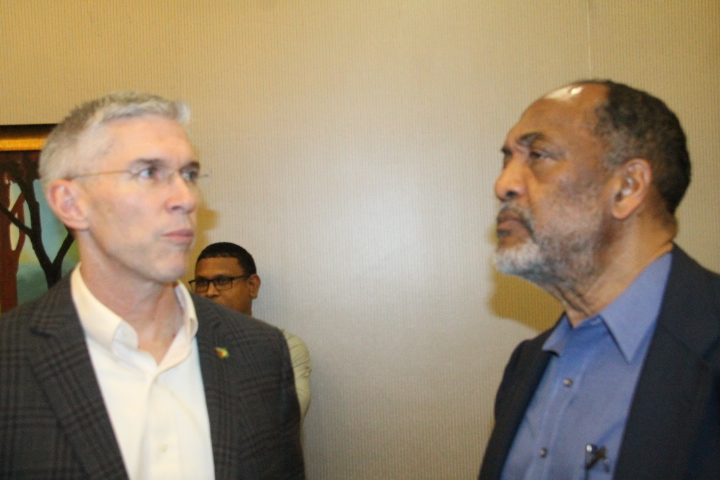 Country Manager of ExxonMobil, Rod Henson on Monday said if the United States (US)-headquartered Nalco Champion (Guyana) Inc. had decided to sign on to an interim 12-month permit to establish a chemical warehouse in Georgetown, that would have been risky for the projected start of commercial oil production early next year.

“There were some conditions in which we could be shut down and with the importance of first oil, we really couldn’t take that lack of certainty in the short term so we’re going to start operations outside of Guyana,” Henson told reporters. He confirmed that Nalco would be shifting its Guyana operations to neighbouring Trinidad from where it would serve ExxonMobil’s operations offshore Guyana.

The ExxonMobil official said Nalco was not giving up on establishing its warehouse in Guyana. “Meanwhile, Nalco is working in parallel to bring those operations into Guyana as quickly as possible,” he said.

Earlier this year, the Central Housing and Planning Authority (CHPA), the Environmental Protection Agency (EPA) and the Georgetown City Council issued orders to cease the construction of the chemical warehouse at John Fernandes Limited’s storage yard at Houston Gardens, East Bank Demerara after outcry from nearby residents.

Henson said Nalco and ExxonMobil did not find the conditions burdensome but he reiterated the uncertainty in the entire arrangement. “The conditions that were put in place are reasonable. We have no issue with them, but in order for our operational certainty, we would rather complete all that operation before we start,” he said.

Stressing that the arrangement that had been put in place was aimed at ensuring that the business stayed in Guyana, the EPA Director said Guyanese authorities needed to find the right balance between business interests and environmental protection. “It is my desire and the agency’s desire and everybody’s desire to have those business operating out of Guyana but there is a limit to that. You cannot compromise on the health safety and environment and let economics of it take over your decision-making process,” Adams told reporters.

The EPA Executive Director confirmed that Nalco has suspended its operations in Guyana and would later apply for a yet unknown site for a permanent location. Adams said that company was aware of the international criteria and standards that are required for choosing a site for a chemical storage facility. “They have the experts, they have the experience in operating in other countries and the one standard that I have implored upon them all is that it would not be anything less stringent than what’s expected internationally and what they have been practicing internationally,” he said.

Nalco has said it was not manufacturing any of the chemicals—methanol, xylene, asphaltene inhibitor and emulsion breaker—manufactured in Guyana but that they would be transported from Texas to Guyana where they would be filtered before taken offshore to the ships.

The company has said the warehouse would be used “strictly” as a warehouse and container transfer facility for storing products and equipment, repackaging chemicals into tanks, filtering chemicals as they are repackaged and transported to the supply vessels. The warehouse, according to Nalco, is not a manufacturing facility and there would be no massive storage tanks, buried chemical tanks, chemical reactions, vapour clouds or steam, flaring or flames, stack or vent fumes.