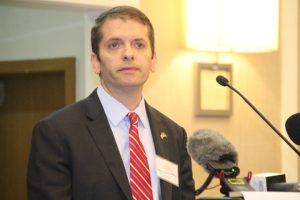 The United States (US) Department of State on Monday thanked Guyana for its support in the 14-member Lima Group that is seeking to find a peaceful end to the political and humanitarian crisis in neighbouring Venezuela.

Addressing a conference on “Enhancing Offshore Exploration and Production Regional Capacity: Operational and Environmental Safeguards” at the Marriott Hotel, Guyana Desk Officer at the State Department, Seth Wikas said, “I want to thank the government of the Cooperative Republic of Guyana for its partnership with the United States. We are appreciative of the role it plays as an active member of the Lima Group, helping us respond to the humanitarian and political crisis in Venezuela”.

Guyana has supported several positions in the Lima Group, but has abstained on key ones such as the declaration back in February that called in Venezuela’s armed forces to back self-proclaimed President, Juan Guaidó.

Wikas further credited Guyana with having a “strong voice” in the Organisation of American States (OAS). The US is among 50 other nations that recognise Guaidó as Venezuela’s interim President. The vote by Guaidó’s representative at the OAS is recognised.

The State Department official noted that Guyana is an “established democracy with close and historical ties to the US including a large diaspora population”. Hundreds of thousands of Guyanese and their offspring live in New York, Florida, Georgia and Texas.

After a decades-old international campaign and the end of the Cold War, former American President Jimmy Carter played a key role in convincing then Guyana President Desmond Hoyte to institute electoral reforms that eventually saw the holding of elections in 1992 that had been widely regarded as free and fair.

Previous: Need for unannounced visits to oil operations – EPA Chief
Next: GTT facilitates help for those in hurricane-ravaged Bahamas