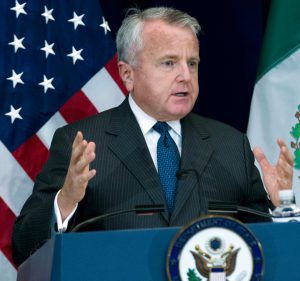 The Guyana Government has not definitively stated whether elections would be held this year, but both the governing A Partnership for National Unity+Alliance For Change and the opposition People’s Progressive Party have identified their presidential candidates –  incumbent David Granger and Irfaan Ali.

Granger has indicated that much depends on the High Court ruling on the validity of the no-confidence motion that was passed on December 21, 2018, and the readiness of the Guyana Elections Commission. The Chief Justice, Roxane George-Wiltshire, is expected to deliver her decisions on three related cases on January 31, 2019.

Meanwhile, Deputy Spokesperson for the US State Department Robert Palladino said Greenidge and Sullivan discussed “the importance of US-Guyana cooperation for Guyana’s safety and security in light of instability in neighboring Venezuela”.

Guyana, a member of the Lima Group of Nations, does not recognise the Nicolas Maduro-led administration in Venezuela. US President Donald Trump has said he recognises Juan Guaidó as the interim president, causing Maduro to break off diplomatic relations with the US and ordering American diplomats to leave within 72 hours.

Meanwhile, Russia has warned the US of serious repercussions if Washington takes military action in Venezuela.

The Guyanese Foreign Minister and the Deputy Secretary of State, according to the spokesman, “affirmed Guyana’s sovereign rights and jurisdiction within its Exclusive Economic Zone”. That reassurance came about two months after Venezuela’s Navy intercepted seismic research and support vessels that had been gathering data on the western end of the Stabroek Block for US oil giant, ExxonMobil.

Guyana and Venezuela have since dispatched protest notes at each other, and Guyana has also registered its concern with the United Nations Secretary-General with a view to taking the matter to the UN General Assembly and possibly the Security Council.

The United States has been reiterating categorically in recent months that it recognises Guyana’s sovereign right to the Essequibo Region, a controversy that is now in the hands of the International Court of Justice. So far, Venezuela has refused to recognise the Court’s jurisdiction and has insisted on bilateral talks.