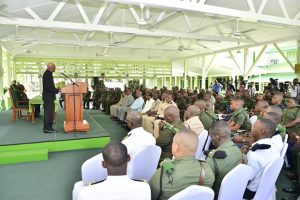 President Granger addressing the opening of the GDF’s 2019 Officers’ Conference.

The Commander-in-Chief of the armed forces, President David Granger, on Thursday announced that the Guyana Defence Force (GDF) would be getting more aircraft, including drones, this year.

Addressing the opening of the 2019 Annual GDF Officers’ Conference, Granger said some of the GYD$14 billion allocated to the GDF this year would be used to purchase “light transport aircraft” as well as drones for border surveillance, inshore patrol vessels, and engineering and transport equipment.

The former army chief said the GDF has acquired two Britten-Norman BN-2 Islander planes, he described as “light reconnaissance aircraft” and noted that the military intelligence has been boosted.

The retired Brigadier declared that soldiers who could not withstand the rigours of long-range exercises deep in the country’s jungle and elsewhere should consider leaving the GDF. “The GDF was never intended to be a ‘coastal’ force; it is, and will remain, a comprehensive national force. It must reach every corner of the country and must be competent in conducting long-range patrols, in any weather or terrain, by day and night and for long periods. Officers and soldiers who cannot go on long-range patrols, in any weather or terrain by day or by night, for long periods have no place in the Defence Force,” Granger said.

He said the two existing exercises codenamed “Greenheart” and “Ironweed” would be extended and the GDF has been instructed also to prepare ration lists that could last much longer. He said the Engineer Corps has received equipment to enhance the Force’s agility, improve its responsiveness to eliminate climate hazards, promote greater stability within frontline communities and foster defence cooperation.

The Engineer Corps, in 2018, worked alongside the Brazilian Army’s 6º Batalhão de Engenharia de Construção to drill wells in the Rupununi Region in order to build greater climate resilience and provide a regular supply of water for frontline communities. “I issued a directive for personnel to be brought up to authorised establishment levels, for operational readiness and infrastructure to be improved and for the technical corps to be upgraded and for equipment to be recapitalised,” Granger explained.

In the area of youth development, Granger said the Guyana National Cadet Corps (GNCC), which was resuscitated on January 19, has trained 364 young persons from six participating schools in five administrative regions. The GNCC recruits youths and is aimed at enhancing their skills and leadership abilities, building character and instilling the values and standards of civic responsibility.

Guyana continues to face security threats such as Venezuela’s ongoing claim of the Essequibo Region and its Exclusive Economic Zone as well as from armed Venezuelan gangs called Sindicatos. Even as the border controversy is before the International Court of Justice, Venezuela’s navy recently intercepted a seismic research vessel that was gathering data on the Stabroek Block offshore Guyana.

While piracy in Guyanese waters has been suppressed, it is still listed as a threat as is the unsettled dispute with Suriname over the New River Triangle in south-eastern Guyana.