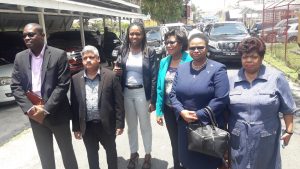 Top representatives of the governing coalition were told by the Chairman of the Guyana Elections Commission (GECOM), Retired Justice Claudette Singh that she hopes to be ready for elections late this year.

Shortly after a meeting with the seven-member commission, leader of the coalition’s delegation, Volda Lawrence told reporters that GECOM would seek to shorten some administrative deadlines to be ready for general elections this year.

“The Chairperson said she had indicated that they are working towards the end of this year to try to see whether the time-frame – all the things that they have to do: statutory and administration – will allow them to conclude on this matter of elections by the end of the year,” Lawrence said in response to a question by Demerara Waves Online News/News-Talk Radio Guyana.

The opposition People’s Progressive Party (PPP) has been making yet another push for general elections to be held by November. Coalition sources have indicated that President David Granger might dissolve Parliament and call elections around mid-December.

Lawrence said the Commission assured her delegation that no statutory deadline would be shortened and that data gathered from the July-August house-to-house registration process would be used.

Lawrence, who is Chairman of the People’s National Congress Reform, said the Commission indicated that they would “not be shortening any process as laid out in the statute (and) they are looking at the administrative aspect to see how they can work with that in terms of the deadlines and timelines.”

Asked whether she was comfortable with that, Lawrence said “we have faith in the GECOM leadership” and the commissioners.

Guyanese had been originally expected to go to the polls no later than next year August. However, last December’s passage of a no-confidence motion, if validated earlier by the Caribbean Court, would have seen elections held no later than March, 2019.

The other coalition representatives meeting with GECOM earlier Friday included David Patterson and Cathy Hughes of the Alliance For Change, Tabitha Sarabo-Halley of the Working People’s Alliance, Jaipaul Sharma of the Justice For All Party, and Basil Williams and Amna Ally of the People’s National Congress Reform.

Previous: OPINION: 18 years later: the legacy of 9/11
Next: Schoolboy stabbed to death