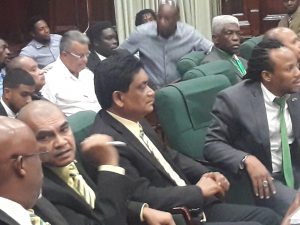 Government back-bencher Charandass Persaud voted with the opposition Peoples  Progressive Party to win the no-confidence motion in the 65-seat National Assembly that was sponsored by the opposition, after several hours of debate.

Despite repeated urges by fellow parliamentarians to change his vote, Persaud declined.

Minister of Health Volda Lawrence also unsuccessfully asked for a brief suspension to allow for a resolution.

Attorney General and Minister of Legal Affairs, Basil Williams sought to block Jagdeo from wrapping up the debate by citing a parliamentary rule that the motion be put. That motion was seconded by Ramjattan, but before Teixeira could object, House Speaker Dr. Barton Scotland said he would speak on the motion after Jagdeo.

Early on in the debate, Opposition Leader Bharrat Jagdeo signaled that even if his People’s Progressive Party lost the vote in the House, that party would win the next general elections.

Except for Minister of Public Security, Khemraj Ramjattan and Junior Minister Simona Broomes, government’s defence of its performance since May 2015 was lacklustre.

Ramjattan, early in his 40-minute contribution, candidly said the vote was down to numbers instead of talk.

“The defence of the no-confidence motion is when we vote here,” Ramjattan said as fewer than 200 mostly green-clad  pro-government supporters stood behind police barriers opposite Parliament Building.

Inside the House, several government parliamentarians were clothed in green and yellow, colors of the governing A Partnership for National Unity and the Alliance For Change.

He charged that the motion was more about Jagdeo- a former President, Opposition Leader, and now PPP General Secretary- on whom he called to give way to a successor. “The discussion here is to show the relevance of the PPP at this time and the mover of the motion. What you are doing here honourable member? You don’t want to give a bright youngster a chance”, said Ramjattan.

Recalling that he had been expelled from the now opposition PPP because he had spoken out against corruption when he had been a member of that party, Ramjattan said the drug trade has been dented and Guyana’s international ranking in combatting trafficking in persons. “Corruption was always going to be their bugbear. I used to be in the belly of the beast and when you start talking, the Honourable member started the expulsion process”, he said.

She accused the APNU+AFC administration of rejecting proposals from the opposition and ignoring its supporters. “One of the major complaints of your supporters is that you ignore them…This government has squandered the goodwill of the Guyanese people especially your supporters,” she said.

Opposition parliamentarians Anil Nandlall and Irfan Ali also pummelled the government’s record in several areas such as a loss of 30,000 jobs; poor economic performance such as high government spending and a lack of private sector stimulus.

Junior Minister Broomes cited improvements in several interior locations such as Bartica, Port Kaituma, Mahdia and Mabaruma in addition to City areas such as Kitty. Broomes also highlighted improvement in the quality of housing being provided to ordinary Guyanese. “We are not moving into housing. We are moving you into communities,” she said. Instead of being a four-member family to be eligible for government housing, she said the coalition government has changed that to any single person 18 years or older.

Nandlall blamed the government for failing to fulfill several promises, such as constitutional reform, outlined in its 2015 elections manifesto. The former Attorney General added that the coalition breached its own February 2015 political agreement between  the APNU and AFC on, among other things, the intended responsibilities for domestic affairs  chairing the cabinet and making certain constitutional bodies.

In his rebuttal, Prime Minister Nagamootoo refused to discuss his role. “I would not be baited into discussing the role of the Prime Minister in this Parliament”, he said.

Saying there were no new arguments by the PPP as they had all been ventilated in the 2019 budget debate.

Williams merely rehashed well-known allegations of state-sponsored death squads, and extra-judicial killings by police.  “There is no way the Guyanese people will ever again give them a mandate to run the government”, he added.

Loud heckling across the floor heard the PPP’s Neend Kumar and APNU+AFC back-bencher referring to extra-judicial killings  Kumar shouted “Vincent Teekah, Fr Darke” who were killed in the 1980s when the People’s National Congress was in power.

Adams lashed back: “(Ronald) Waddel, Crum-Ewing,  and Sash Sawh “your own minister” who were all gunned down in the 2000s while the PPP was in office.

Nandlall predicted that his PPP would win the next general elections and government has done a poor job in defending its record.”We will go in 2019 or in 2019 and you will be beaten again. And why, because the people of Guyana have given you a fair chance,” he added.

Nandlall, a likely presidential candidate for the PPP, failed to use the Ethnic Relations Commission to conduct ethnic impact assessments, repeal legislation to enshrine independence of the Parliament, a largely non-functional Judicial Service Commission and failure reform and modernise the Deeds Registry. At that juncture, Attorney General Williams heckled “done, done” to indicate they had been completed. “They are calling their own manifesto a bogus manifesto”, he added.

Nandlall also assailed government for failing to fulfill its promise of 2,000 jobs in each of the 10 administrative regions, and the creation of a national youth policy