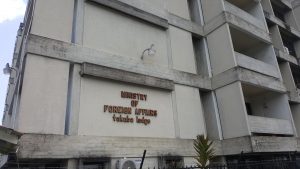 Guyana is moving to establish a “blueprint” to strengthen protection of intellectual property and copyright in a country where copying of books, movies and music and other works is almost routine, the Foreign Ministry announced Thursday.

He said WIPO, a United Nations specialised organisation, has already reviewed Guyana’s draft intellectual property and copyright legislation and would be working on industrial property protection and geographical indicators. “What we are supposed to do is to work with them on the industrial property legislation and they are also proposing to work with the Ministry of Indigenous Peoples Affairs on the question of geographical indicators,” he added.

He added that Guyana was also working with the Caribbean Community (CARICOM) bloc of nations and the Economic Commission for Latin America and the Caribbean (ECLAC) on the trade aspect of intellectual property.

In highlighting the importance of adequate protection of works, Greenidge pointed out that Guyanese musicians and writers do not enjoy such rights. “Part of the problem they have is living in Guyana and publishing stuff in Guyana, they face the problem of copyright theft, sometimes committed by governments,” he said.

After President David Granger earlier this year announced that intellectual property would form part of his government’s legislative agenda. However, the opposition People’s Progressive Party (PPP) has warned that such legislation could eventually make accessing textbooks, cable television and other rights-owned material almost prohibitive due to high cost.

The United Kingdom Publishers Association had secured an injunction against the then PPP-led administration to prevent it from procuring bootlegged textbooks of British publishers. At that time, government had entertained a bid from a local mass photocopier of foreign textbooks to supply the Ministry of Education.

Currently, rights holders have to seek civil redress through the 1956 British Copyright Act that Guyana inherited from Britain at the time of independence in 1966.

2018-12-20
Denis Chabrol
Previous: Guyana welcomes US’ scrapping of sanctions on RUSAL; jobs at Aroaima not in jeopardy
Next: PPP wins no confidence motion; AFC MP sides with opposition