Guyana welcomes US’ scrapping of sanctions on RUSAL; jobs at Aroaima not in jeopardy 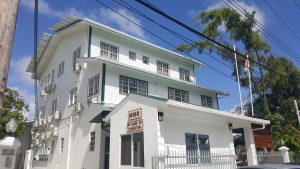 Guyana on Thursday welcomed the United States’ (US) decision to lift its sanctions on UC Russian Aluminium (RUSAL), the majority owner of the Aroaima-based Bauxite Company of Guyana Inc. (BCGI), suggesting that workers would not lose their jobs.

“The Government of Guyana and the Ministry of Natural Resources are cautiously optimistic, and happy, with this recent development of the matter of the US Government sanctions instituted against RUSAL, heading towards resolution; thus, further ensuring that the jobs of the local workforce will not be in jeopardy,” the ministry said.

There had been concerns in some quarters that BCGI/ RUSAL had planned to lay off  some workers by January, 2019 if the suspended sanctions had not been lifted altogether.

The Natural Resources Ministry credited the Foreign Ministry with securing suspensions and the eventual scrapping of the sanctions by the US. “The Ministry has been monitoring this unfolding saga for several months, and making necessary interventions, in conjunction with the Ministry of Foreign Affairs, which has provided quiet diplomatic support, and is pleased that following a series of extensions that led to the postponement of the enforcement of the sanctions, a permanent and favourable resolution is in sight,” the Natural Ministry added.

Government said the Ministry of Social Protection would be responsible for addressing the ongoing, and future, labour issues and guard workers’ rights.

RUSAL owns 90% of the Aroaima, Berbice-based Bauxite Company of Guyana Inc (BCGI) and employs more than 500 persons at its operations on the Berbice River between Kwakwani and Linden with the majority being Guyanese.

In April 2018, the U.S. Treasury imposed sanctions on billionaire RUSAL majority shareholder, Oleg Deripaska, aluminum giant United Co. RUSAL and other companies he owns shares, citing “malign activities”. This has since promoted turmoil in global aluminum markets, seeing prices rise by as much as 20 percent.

The agreement reached by the parties outline that sanctions on the company would only be lifted if Mr. Deripaska would significantly lower his stake in the company, which, it is reported, has been agreed.

According to official reports, the US Treasury Department believes that companies in which Mr. Deripaska owns shares, have committed to significantly diminish ownership and sever his control, hence their move to remove financial restrictions on Rusal and other groups in which he owns majority shares.

The US has warned that the companies would be subject to ongoing compliance and will face severe consequences if they fail to comply. The move is set to take effect in 30 days.