Gov’t takes aim at Roger Khan ahead of his return 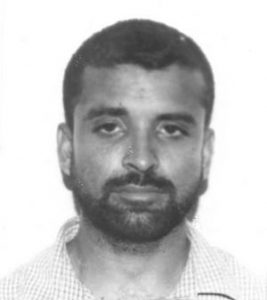 The Guyana government has signaled that it has taken aim at convicted drug lord, Roger Khan, who is yet to be deported from the United States where he had served 10 years for trafficking cocaine.

Attorney General Basil Williams, in Tuesday night rejecting opposition concerns that he had allegedly threatened post-elections violence if there was no house-to-house registration to create a fresh voters’ register, lashed back at the People’s Progressive Party (PPP) for handing over Guyana’s public security and crime fighting to drug lords including Khan.

“Khan himself had confessed in a full page advertisement in the local newspapers about this,” the Attorney General said. Khan had stated that he had prevented the then administration from being toppled.

At a packed community meeting of mainly PPP supporters following the Lusignan massacre, there had been many placards calling for Roger Khan and then Home Affairs Minister Ronald Gajraj to intervene.

Khan was released from a US prison several weeks ago and is being detained pending deportation. His lawyer, Glen Hanoman said the Guyana embassy in the United States and the Births and Deaths Registry were frustrating the process for him to acquire travel documents.

Williams’ reaction contained copied-and-pasted excerpts from the state-owned Guyana Chronicle newspaper that were published in February, March and June, 2019.

“During the period 2003-2006, Khan, had set up a criminal network in Guyana including active policemen and a number of former ranks, ostensibly to go after criminals, but at the same time protecting his narco-trafficking interests.” “Although the PPP Government had sought to distance itself from Khan, the drug-trafficker had stated publicly in an advertisement in local newspapers that he had been fighting crime on behalf of the Bharrat Jagdeo-led government.

Khan had also implicated former Health Minister Dr Leslie Ramsammy in his escapades, and documents bearing the then minister’s signature authorising the purchase of a sophisticated wire-tapping device were produced in U.S. courts during Khan’s trial,” the Chronicle reported in February, March and June, 2019.

He said the PPPC’s reign of terror left more than 900 persons dead including “its own” Minister of Agriculture Satyadeo Sawh in April 2006 for which no inquest or inquiry was held.

The David Granger-led administration is yet to hold a commission of inquiry into that period or an inquest into Sawh’s death. The United States State Department had observed in one of its annual narcotics reports that Sawh had objected to the sale of Kaow Island to Aurelius Inc, a company that had been controlled by Khan.

The Attorney General said the PPPC presided over the worst kinds of violence ever seen in the history of Guyana or any Caribbean Community (CARICOM) member state including extra-judicial killings, state-sponsored death squads, phantom squad and one allegedly presided over by then Home Affairs Minister Ronald Gajraj.

Gajraj had issued a gun licence to Axel Williams who was later gunned down. A commission of inquiry had cleared Gajraj of any links to a death squad and he stepped down from his ministerial post. He was appointed High Commissioner to India , a post he had held until 2015 when the PPP lost power.

Williams reiterated that former President Bharrat Jagdeo was ruled Guyana from August 11, 1999, to December 3, 2011, during which there were three massacres: the January 2008 Lusignan where 11 people were killed, February 2008 Bartica where another 12 were killed and June 2008 Lindo Creek where seven miners were slaughtered.

At an American Chamber of Commerce-Guyana panel discussion earlier this week, Williams remarked that, “they are willing to go to the election with an anyhow list. They are ready for their properties, and all these things, to be subjected to those same post-election type of violence that we had in the past. I don’t want to say well y’all go, go to the Election, because the consequences would be dire.”

That comment did not go down well with the PPP which accused President Granger of tolerating such utterances. “The Party firmly believes that President David Granger is ultimately responsible for such reckless comments. It is clear that he opts to present a disposition that is above reproach while he dispatches his minions to engage in a campaign that does nothing, but harm to our nation,” the PPP said.

The Attorney General accused the PPP of distorting his account of the history of Guyana’s post-election violence and blamed the previous administration for infiltrating peaceful opposition protests marches “with their agent provocateurs who went on a rampage of burning down Indo-Guyanese businesses and beating up Indo-Guyanese people. They then used their propaganda machine to blame other political parties.”