Chief Justice to rule on house-to-house registration next week 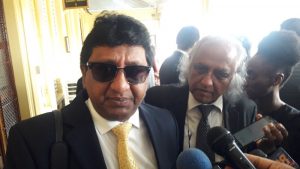 Guyana’s Chief Justice, Roxane George-Wiltshire is next week expected to rule on whether the house-to-house registration exercise should be halted to make way for general elections following the Caribbean Court of Justice’s (CCJ) validation of last year’s no-confidence motion.

Attorney-at-Law, Anil Nandlall, who is representing political commentator Christopher Ram, said George-Wiltshire would on August 14 rule on whether the registration exercise would collide with the three-month timeframe within which general elections must be held following the passage of the no-confidence motion.

“If you are faced with a constitutional timeframe and you have one process you can go to, refresh the list by house-to-house or the other process is to have a claims and objections….You have constitutional prerequisites, you have an order of court, you have a timeframe? Which one you are going to use?: Which one GECOM (Guyana Elections Commission) should have adopted? Will you adopt the one that will run you on a collision course with the constitution and the ruling of the apex court of the land or you will use one that will bring you into conformity with the Act and GECOM has chosen the one to put you on a collision course and this Court has a duty to stop it,” Nandlall said.

He noted that the original period within which general elections ought to have been held after the December 21, 2018 no-confidence motion had been March 21 but since the motion had been challenged in Guyanese courts and at the CCJ, the new deadline ought to be by September 18 – three months after the regional court validated the no-confidence motion.

By GECOM’s own timeframe, Nandlall argued, house-to-house registration should have begun on June 2 but instead started 48 days later which could see that exercise being completed in January. After that, he said it would take 119 days to extract the voters’ list based on its work plan. “Is this court going to consider itself being held at ransom by GECOM? The constitution must await GECOM or is the other way around?,” he said.

The High Court is also expected to decide on the legality of the registration exercise. Ram wants the Court to find that fresh house-to-house registration would replace the existing National Register of Registrants and so exclude thousands of Guyanese who are not in the country at the time of the exercise.

The registration exercise, which began on July 20, has reportedly captured the bio-data and fingerprints of more than 100,000 persons. But Nandlall said the Chief Justice disagreed with former  Attorney General Anil Nandlall’s argument that house-to-house registration “is not mandatory”.

The High Court’s pending decision on the implications of the house-to-house registration on the timeframe for holding elections came less than one week after the GECOM Chairperson, Retired Justice Claudette Singh held separate talks with the six election commissioners who are equally divided between government and the opposition.

The opposition People’s Progressive Party is adamant that general elections must be held with the existing voters’ list which expired on April 30 but which can be refreshed through a claims and objections period. Chief Elections Officer, Keith Lowenfield has said such a process could be used to allow for free and fair elections to be conducted with the same list.

President David Granger and his governing coalition have, however, insisted that house-to-house registration is the surest method to ensure there is a credible list instead of one that is bloated by more than 200,000 names and has other defects.

Nandlall told the High Court that, based on a decision by then Chief Justice Singh, the Court could fix a timeframe within which elections should be held, but not a date “since that is the prerogative of the President in a proclamation”.

He also reminded Chief Justice George-Wiltshire that in her ruling on the no-confidence motion, she had cited a timeframe within which Guyanese should return to the polls to elect a government of its choice.