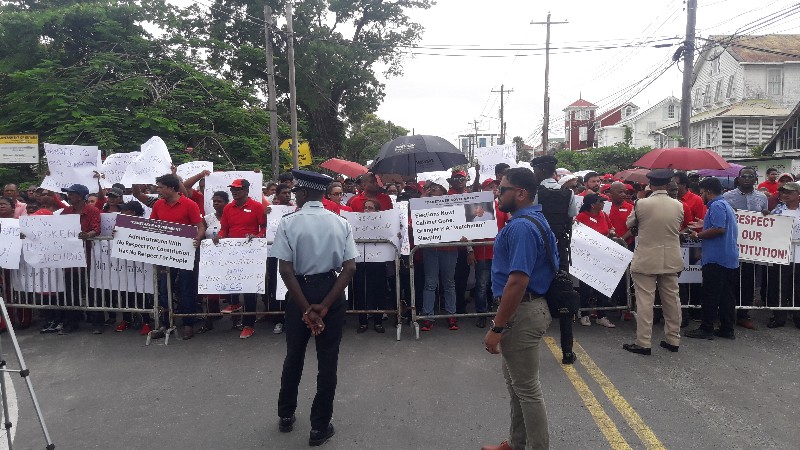 PPP supporters at High and Barrack Streets, Kingston, aiming their protest at the headquarters of the Guyana Elections Commission (GECOM).

Opposition Leader Bharrat Jagdeo on Friday warned that contempt of court proceedings would be filed against Chief Election Officer Keith Lowenfield if the Guyana Elections Commission (GECOM) goes ahead with house-to-house registration.

“We don’t want to be caught up on the issue of a long, legal battle again but we may file contempt proceedings against Lowenfield but not to go back and re-litigate what the CCJ (Caribbean Court of Justice) has already ordered,” he said at a police barrier during a protest by about 500 party supporters a short distance from GECOM’s offices on High Street, Kingston.

Jagdeo feared that general elections would be held next year if there is house-to-house registration instead of within three months as a result of the no-confidence motion.

The Opposition Leader, however, told his People’s Progressive Party (PPP) supporters that if GECOM gets its way, steps would be taken to watch the process vigilantly. “We are a serious political party. We want to see what they’re doing on the ground but we will fight to stop it and we will stop it because it is inconsistent with the law but we will still track it. We need to track what’s going on (on) the ground because if you don’t they may tamper with certain things and we want to make sure we cover all angles so we win these elections overwhelmingly,” he told party supporters in Red House compound.

The PPP contends that the June 11 Official Gazette of an order for house-to-house registration to commence on July 20 was secretive and illegal because it was issued by then GECOM Chairman, Retired Justice James Patterson whose unilateral appointment by President David Granger was deemed as flawed and unconstitutional by the Caribbean Court of Justice (CCJ) on June 18.

On July 12 the CCJ further stated that general elections ought to have been held within three months of the passage of last December’s no-confidence motion unless Parliament had granted an extension with a two-thirds majority of the 65-seat House.

While the court did not specify a date for elections, it stated that it was for the Opposition Leader, President, Parliament and to some extent GECOM to determine when Guyanese should go to the polls. “I wonder on what legal basis is Mr. Lowenfield going forward because we all accept that the July 12 decision overtook any order that was signed before,” said Jagdeo.

Jagdeo discarded arguments by pro-government supporters that fresh house-to-house registration is required to get on the voters’ list which expired on April 30. “I urge APNU supporters to pay careful attention to what the law is and anybody who is not on the list can get on the list in the claims and objections period without the requirement of a house-to-house registration,” he said. 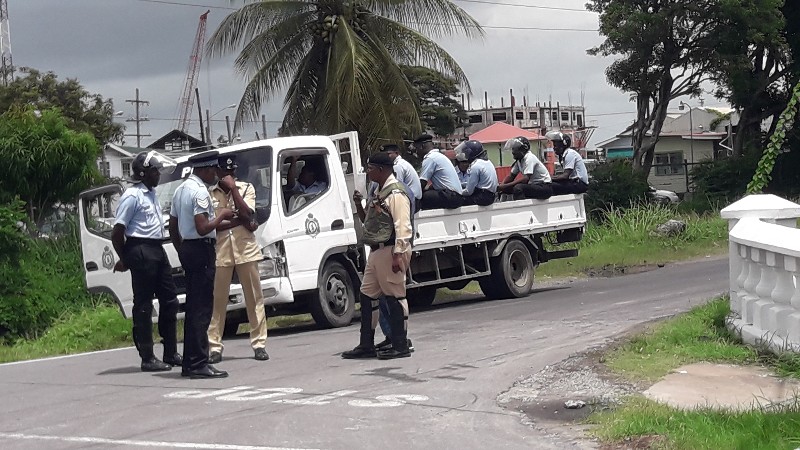 Riot police on standby outside the GECOM in case the PPP protesters had advanced to that location.

The Opposition Leader, who is also General Secretary of the PPP, said in addition to the gazettes, there is evidence that GECOM has circulated folders for enumerators over the past three days to registration offices countrywide.

Concerned that PPP protesters might have pushed down the barriers at High and Barrack Streets and headed closer to GECOM’s offices, riot squad police were deployed and put on standby at Cowan and High Streets.

Many of the PPP supporters were mobilised and transported to the protest line where they chanted slogans and held placards to press home their positions.

Meanwhile a woman, who threw dirty water on protesters, was arrested by police and she was expected to be charged with assault. The woman was inside a yard at High and Barrack Streets.