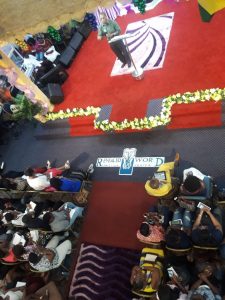 Head of the Department of Energy, Dr. Mark Bynoe speaking with congregants about oil and gas.

Guyana has asked the Islamic Development Bank (IsDB) to finance the training of local persons for the emerging oil and gas sector, even as top officials said foreigners would have to be employed if there are insufficient Guyanese to fill vacancies.

“A reverse linkage programme in technical and vocational training with emphasis on addressing the critical needs of our emerging oil and gas sector,” is one of several priority areas Finance Minister, Winston Jordan recently told the 44th annual meeting of the Islamic Bank Group held in Morocco.

Jordan’s announcement that Guyana wants to tap into IsDB funding coincided with the Head of the Department of Energy, Dr. Mark Bynoe’s disclosure to congregants of the Revealed Word Christian Center in Georgetown that oil industry companies were being asked to give priority to employing Guyanese. If the skills, he said, are unavailable the companies have to turn their attention to the overseas labour market.

Bynoe said that of last year, 1,071 Guyanese, up from 458, were hired directly by the oil and gas sector. He said government has asked ExxonMobil to report every quarter on its contribution amount. 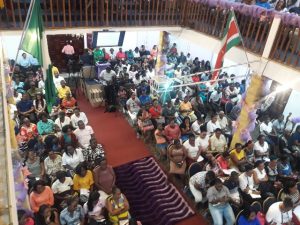 He said a range of job opportunities were available for electrical engineers, mechanical engineers and welders, among other trade skills.

The Energy Department boss said the time has come for Guyanese to think positively and grasp and create job opportunities while at the same time ensuring they have the right attitude in areas such as customer service. “You cannot be crying that other people are getting the jobs and we are not putting ourselves in position,” he said.

Punctuating his presentation with quotations from the Holy Bible, Bynoe said the oil reserves were provided by God and he indicated that steps would be taken to ensure they trickle down to ordinary people. He said there were, for instance, opportunities to invest in quality hotels.

Head of the Council for Technical and Vocational Education and Training (CTVET), Floyd Scott said Guyana does not have sufficient trainers in the areas of technical and vocational education and so the country would have to ensure that foreigners transfer their knowledge to Guyanese for the formulation of local standards. “We have to take advantage of those persons with the requisite competencies and when they come to Guyana, we address those areas that directly relate to the Guyanese context and the Guyanese condition.

Scott said already the country was suffering from a shortage of welders for the energy sector. “We are recognising right now that we do not have the requisite skills to even deal with the welding opportunities that are presenting themselves,” he said.

Another shortage, he referred to, is that for housekeepers for the tourism sector because Guyana does not have such qualified personnel. “The fear is that I have is that others will have to come in and provide that service,” he said. Scot urged the attendees to see themselves as having community links and facilitating training of persons to prepare them for “decent work”.

Scott added that Guyana now has to “upgrade and re-skill” Guyanese to meet current demands with the highest quality and standard of certified persons who could work anywhere. Scott also cited the need for Guyanese to change their behaviours to take advantage of opportunities. “With what is happening in Guyana, there will be a requirement for us to have a critical behavioural change in our country—our personal values, our moral values—and we have to recognise that there will be those around who are doing the same business as you are doing, but what separates us will be the quality of service that we provide,” the CTVET official said.

During the question and answer session, a member of the congregation asked what provision could be made for the youths, who were at the street corners, but could deliver high-quality work. Scott said they would have to go to the CTVET office and undergo a variety of tests to prove their competency before they are awarded certificates.

Previous: Minister Hughes “relinquished” day-to-day running of private company amid fresh concerns about conflict of interest
Next: PPPC’s Irfaan Ali: “I’m an honest candidate”…”I stand completely by all my qualifications out there”