PPPC’s Irfaan Ali: “I’m an honest candidate”…”I stand completely by all my qualifications out there” 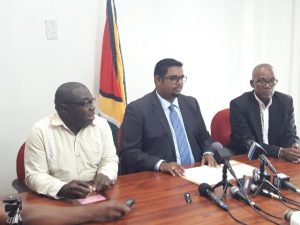 People’s Progressive Party Civic (PPPC) presidential candidate, Irfaan Ali continues to maintain that his academic credentials are above board, telling reporters on Thursday, “I’m an honest candidate. …I am very comfortable with my qualifications.”

However, he provided few details including whether he used a suspicious paper from a virtually unheard of West Coast Demerara institution to register for his first Master’s Degree in India. He was asked specifically to state the baseline qualification he had used to pursue that degree.

Ali refused to answer the question and when he was told so, news conference moderator Kwame McCoy interjected saying “Excuse me, Mr. Ali has answered the question in the way he wishes to answer. I will now ask us to move on.”

Questions were raised about the purported first degree that Ali received from the Chamber Business School at West Coast Demerara. He insisted that all of his qualifications are genuine. “I can assure you that all my certificates are out there and I stand by them and I stand completely by them,” he said. “I stand completely by all my qualifications out there,” he reiterated.

He said he was wrapping up his studies for a doctorate and at the same time he was pursuing a Master’s in Laws in International Commercial Law.

To almost every question posed to him by several reporters at his first press conference since he was picked to lead his party into the next general and regional elections, Ali maintained that “all of my qualifications are out there” and ” I stand” by them.

He pledged to encircle himself with a high calibre of persons to deliver on the PPPC’s campaign promises that he said were now being costed as part of preparations for the manifesto. “I would surround myself with the best team. I am a team person. I’m team-oriented. I think that we will achieve everything through a great team effort,” he said.

Unlike Opposition Leader Bharrat Jagdeo, who is also the PPP’s General Secretary, Ali did not host the press conference alone. He was flanked by McCoy and Joseph Hamilton.

After Hamilton faced searching questions about his role as a representative for a Surinamese company that has been building model houses for the Ministry of Communities, McCoy abruptly ended the news conference.

During the encounter with the media, McCoy at times sought to shield Ali from persistent questions about the authenticity of his qualification, a matter on which the presidential candidate appeared disinclined to want to face questions again. “I have nothing else to add on this issue,” said Ali who is a former Housing, Water and Tourism Minister.