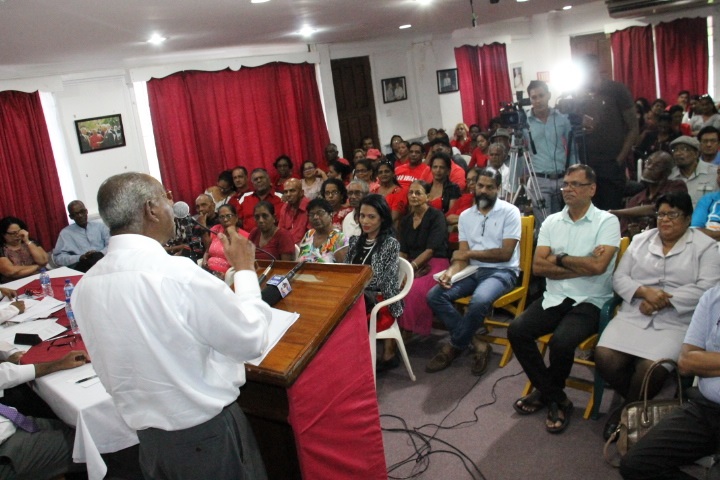 Former House Speaker, Senior Counsel Ralph Ramkarran Wednesday said the government and the opposition should agree to an election date and pave the way for the Guyana Elections Commission (GECOM) to begin polling preparations.

“The solution to the problem is to have an agreement with the Leader of the Opposition for a date for elections – maybe an extended date. I’m sure the Leader of the Opposition will not begrudge some extra time to give the Elections Commission some extra time to get itself in order,” Ramkarran told a public forum organised by the Cheddi Jagan Research Centre and held at Red House

On the thorny issue of three of the GECOM Commissioners saying that a new list has to be prepared and that could take as much as 18 months, GECOM’s administration has said house-to-house registration would take nine months, while holding elections after a Claims and Objections period to refresh the existing list that expires on April 30, 2019 could take about 148 days during which polling day officials would be trained and sensitive election materials would be procured.

Ramkarran said “it is not the job of the Elections Commission to demand a new list” but that is the work of the government to do so through the National Assembly. “It is the government that must pass the necessary legislation to effect a new list or the legislation will direct the Elections Commission,” said Ramkarran, a former executive member of the People’s Progressive Party and now co-founder of A New and United Guyana (ANUG) political party.

With the Guyana Constitution stating that general elections must be held within three months of the National Assembly’s approval of last December’s no-confidence motion, Ramkarran said GECOM could inform Guyanese that the voters’ list is defective because it is bloated with dead persons and migrants. “That is what they must say. And if the Guyanese people say, through their representatives, ‘proceed with the elections as the constitution requires’, that’s what they have to do,” he said.

Ramkarran said the government and the opposition could exercise the option of postponing the elections until house-to-house registration is conducted to generate a new voters’ list. “That is not the job of the Elections Commission. That is the job of government so we are going into a state where we’ll have a government (that) does not exist[] legally,” he said.

Ramkarran announced that he alerted a Carter Centre fact-finding mission about the “dangers of the situation” including diplomatic activity with the Americans, British, Canadians and the Europeans grinding to a halt, cessation of lending by international financial institutions, domestic banking, and local and foreign trade.

“A major calamity is brewing unless the government decides what to do,” he said. He suggested to the Carter Center team, which has so far held meetings with GECOM, government, opposition and civil society, to take a position on how to resolve the impasse.

Ramkarran objected to Chief Justice Roxane George-Wiltshire’s failure to grant Christopher Ram an order that elections must be held on or before March 21, 2019. “That was the most critical declaration, perhaps the most critical in the entire several cases. If the Chief Justice had made that order, Granger could not have said what he is saying today that ‘I’m President and will remain so until the next President is elected’ if the Chief Justice had ordered that elections must be held. Technical reasons and other things, according to the Chief Justice, prevented her from making the order. I think she could have made the order but she did not,” said the Senior Counsel. He hoped Ram would cross-appeal right up to the Caribbean Court of Justice and “stall President Granger’s admission to remain in office until 2020.”

Attorney-at-Law and political commentator Christopher Ram told the forum that if the parliament does not extend the 90-day period – of the December 21 passage of the no-confidence motion – by which general elections must be held, the Chancellor of the Judiciary, Yonette Cummings-Edwards would have to preside over the management of the country. However, that would raise serious questions about conflict of interest in hearing appeals of the Chief Justice’s decisions on three cases concerning the no-confidence motion.

No one addressed the implications for holding elections as soon as possible although the Attorney General Basil Williams has begun filing appeals and has asked for a stay of the Chief Justice’s decision and a conservatory order to keep the President and Cabinet in office rather than resign.

The other panelists were former Attorney General Anil Nandlall and Chartered Accountant Nigel Hinds. The event was chaired by Dr. Frank Anthony.

Nandlall echoed Ramkarran’s call for the country’s two top political leaders to stave off the impending constitutional crisis that could “unmitigated and incalculable”. “There is no indication indirectly or directly that the President intends to fix the date for elections because ultimately the date has to come from within the constitutional time-frame, of course, but he is masquerading as if  everything is OK so like my colleagues.

“The only way is for the Leader of the Opposition and the President to sit down, extend time and do what is necessary,” Nandlall said.

Meanwhile, Opposition People’s Progressive Party (PPP) elections commissioner, Robeson Benn and governing coalition-backed elections commissioner Vincent Alexander said separately shortly after an Elections Commission meeting on Wednesday that it was now clear that Jagdeo and Granger would have found a way out of the impasse. “I’m saying the time has been frittered away and that’s where we are essentially, and I think the principals are aware… that we are at a ‘no-go’ position and it is for them to act, it is for them to act. We discussed this over weeks and there has been no progress,” said Benn.

“My own view is that this matter is going to go to the political leaders. Either way the vote goes, this matter goes to the political leaders… It has to go. As far as I am concerned, we have gone past the 19th of March and once you go past the 19th of March, it requires parliamentary action,” said Alexander. He said GECOM appeared closer to referring the standoff to the President and the Opposition Leader instead of a vote.

Alexander, at the same time, believed that house-to-house registration could be conducted in six months rather than nine months as had been stated by GECOM.

While Benn acknowledged that any commissioner could call for the issue to be put to a vote by the seven-member body, he said that was the prerogative of the Chairman, James Patterson who has a “full understanding” of the positions. Benn suggested that he would not entertain a vote that included house-to-house registration because he believes the elections should be held by March 21 with the current voters’ list or through a claims and objections period to sanitise the list. “I’m not going to go willy-nilly into any issue of a vote where the question of house-to-house registration is being tacked on to the elections. I’m not of that view. I will not go into that situation,” he said.

Benn called for a Commission of Inquiry to ascertain why the GECOM administration and/or the Commission have contributed to the delay by failing to prepare for the polls immediately after the no-confidence motion had been passed last December.