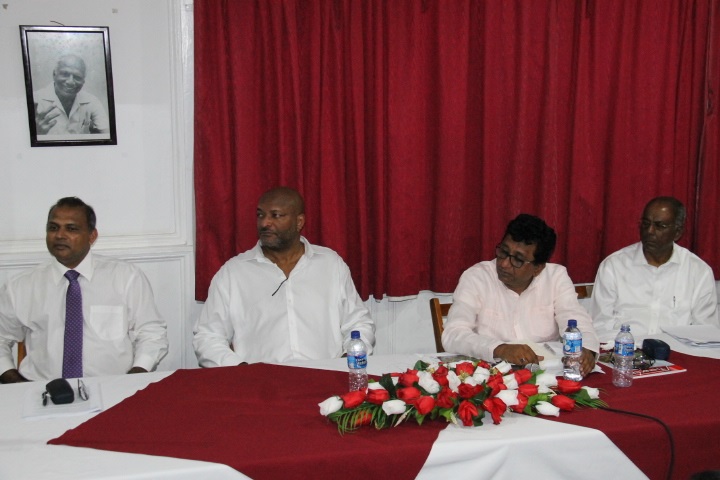 Parliamentarians, who are dual citizens, would first have to be replaced before the National Assembly considers an extension of the 90-day deadline for holding general elections or monies for those polls, a public forum heard Wednesday night.

Organised by the Cheddi Jagan Research Centre and held at Red House, the panel discussion on the topic “Is Guyana heading towards a constitutional crisis” was told by former Attorney General, Anil Nandlall that the dual citizen parliamentarians would have to be replaced.

“We have another problem because the dual citizens on their side have not even signaled their intention to give up their citizenship so we can’t even go back to parliament in the current state that they’re in because their votes are going to be invalid because there are about five of them,” he told the forum.

However, Harmon has refused to acknowledge that he could not be a candidate being a dual citizen. “No, I don’t acknowledge that. The ruling is a first instance ruling and all rulings will have to (be) appealed until to the final court which is the Caribbean Court of Justice and, therefore, I would consider this to be a first instance judgment,” he said. He has reiterated that the People’s National Congress Reform would first have to consider the implications of the court’s decision on dual citizenship.

Opposition Leader Bharrat Jagdeo has said that Teixeira has signaled her willingness to give up her Canadian citizenship, in the wake of Chief Justice Roxane George-Wiltshire’s decision that it is unconstitutional for dual citizens to be candidates and parliamentarians.

The issue had taken political and legal centre stage after then government lawmaker, Guyanese-Canadian Charrandas Persaud had voted for the opposition-sponsored no-confidence motion on December 21, 2018 leading to its passage by a vote of 33 to 32 in the 65-seat National Assembly. Despite his unconstitutionality, the Chief Justice declared his vote valid in keeping with another section of Guyana’s constitution that says proceedings are still valid even if a parliamentarian should not have been a member of the House.

Chartered Accountant, Nigel Hinds also told the panel discussion that the members of parliamentarian who are dual citizen legislators must vacate their seats. “Also, the members of parliament and ministers with dual citizenship must be removed from these positions. These actions in these positions have far reaching negative and damaging implications. It is easy to poke holes and sometimes irresistible to do so in the delaying manoeuvres of the government to revoke and/or delay the implications of the no-confidence vote,” he said.

Hinds contended that “…Carl Greenidge is illegally holding office as Minister of Foreign Affairs and he should not be representing Guyana in international relations, international security, foreign investments and donors.” “The ruling by the Chief Justice that no person by his own act and any acknowledgment of allegiance, obedience or adherence to a foreign power or a State has no place in the National Assembly (and) is not a member of parliament and by extension not a minister,” said Hinds.

Senior Counsel Neil Boston, who is one of several lawyers representing private citizen Compton Reid in challenging the constitutionality of the no-confidence motion, has said it appeared that the Chief Justice’s decisions would adversely impact the parliamentarians who are dual citizens. “It would appear as though they may have to vacate their seat. We can’t speak for them and what they may do because, as you know, politicians speak with forked tongues… Legally, they should not be there but the thing is you can have a foreign passport but the section says ‘by your conduct’ you were acknowledging allegiance and obedience to a foreign power,” Boston has said.

There is growing sentiment among the seven-member Elections Commission that with elections no longer possible by March 20 when the 90-day election period expires, that the House would have to meet to extend the deadline to pave the way for the Commission to prepare for the polls either with the current voters’ list or a refreshed list by house-to-house registration.

The opposition People’s Progressive Party and its three elections commissioners are adamant that Guyanese could go to the polls using the existing voters’ list with a claims and objections period, while the governing coalition and its commissioners are equally insistent on house-to-house registration.