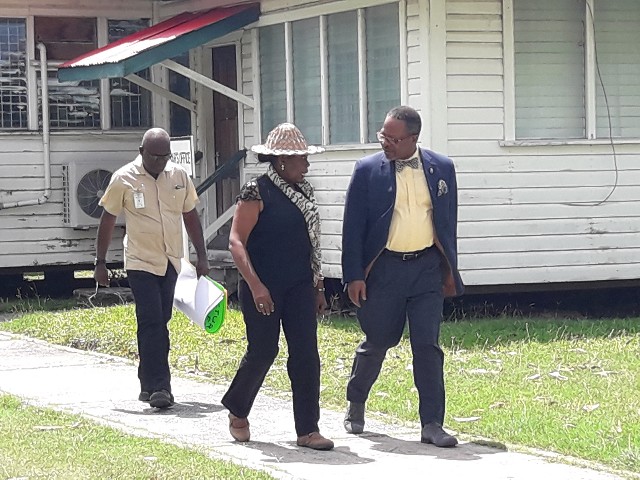 University of Guyana (UG) workers on Wednesday intensified their demand for an in-depth examination of how the institution is spending its monies at a time when there is a cutback in certain expenses, but Vice Chancellor Ivelaw Griffith denied responsibility for running the institution broke.

“Of course, not! But it’s hazy and wanton to make public accusations of all kinds but I can’t be guided by people who just go out…,” he said.

The workers’ unions believe that the Vice Chancellor has been wasting much-needed money on employing several select persons, including overseas-based Guyanese, at super-salaries, sending large delegations to overseas events, and holding social events at his residence on the university’s bill.

“Let them open the books and let us see what’s in there. We have got to get a forensic audit to see where the money is going. We have been receiving money from donors all over the place. We want to know how that money was spent and exactly what it is being spent on. We want to be consulted,” University of Guyana Senior Staff Association (UGSSA) Treasurer, Dr. Pat Francis told reporters.

The workers picketed the Vice Chancellery Wednesday for a third straight day, holding placards that read “Lecturers fed up. Another strategic plan. Waste of money. Big insult to academic laziness”, “Where is the money? More money but none for the staff”, “No money for protective clothing for staff”, “Staff are getting sick. No money to repair building.”

Dr. Francis, speaking with the media from the picket line outside the Vice Chancellery Wednesday afternoon, contended that that tertiary institution was “top heavy” with persons who were being paid “hefty salaries and they want to give us peanuts”. In an apparent reference to the Vice Chancellor, who has worked in high-level administrative positions in a number of American universities, Francis said Guyana was not ready for a North American-modelled UG. “We are operating in a top-down system where oligarchs at the top like the North American model where the oligarchs take the cream and the crumbs are left for the proletariat, the slaves… We are saying down with the North American university model and up with the Guyana model which is the university for the people,” she said.

Francis lamented the imposition of wage and salary increases in direct contrast to the governing coalition’s 2015 elections campaign promise that remuneration would emerge out of negotiation. “What has happened to the promise that the government made to us that we will come to the negotiating table and we are very unhappy. We cannot let it pass because if we accept this imposition of three and four percent, then what can we say? We have to say ‘No!’ to imposition of wages and salaries on the staff so that is one of our main conditions,” said Francis, a former UGSSA President who says the grievances at the university dates back to 1986 when she first started teaching there.

Vice Chancellor Griffith said UG has been raising a lot of funds but those are not for general operations and recurrent expenditures such as wages and salaries but are for “specific things”. He said the university could not afford to pay higher salaries for 2018 as those would also determine the hikes for 2019 and housing and other allowances. “Whatever we do in 2018 becomes a base for 2019. We just don’t have more,” he added. Griffith appealed to the unions and workers to consider the entire package which includes free tuition for staff members’ children. 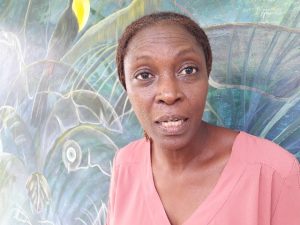 Lecturer, Dr. Melissa Ifill, who has expressed grave concern on her Facebook profile about the Vice Chancellor’s expenditures, said she was simply responding to the austerity measures such as no photocopying, no refreshments at meetings, possible withdrawal of some allowances, while the institution’s budget is escalating. She said except for two telephone numbers, UG has no Internet service.

But Griffith charged that the real reason for the unreasonable, inaccurate and emotional arguments was to remove him from the post of Vice Chancellor. “There is an ulterior motive in this: to get rid of me. That started since last year and Ifill was part of that,” he said. The Vice Chancellor believed that he was being targeted because he has been demanding accountability such as submitting students’ grades punctually. “People don’t want the Vice Chancellor to talk about that so it’s not just about the money. It’s about my asking for accountability,” he said.

The UGSSA Wednesday was not ready to search for a compromise in a long-running pay dispute with their administration, even as Vice Chancellor Ivelaw Griffith said he is ready to open his accounts to prove that he cannot pay higher salaries. 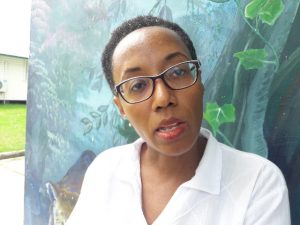 President of the UGSSA, Dr. Jewel Thomas said union executives and members were due to decide Wednesday whether to call off their industrial unrest and go to conciliation talks that have been requested by the Ministry of Labour. “We are not saying ‘never’. We are saying at the moment, it’s not a step that we wish to take given the circumstances we have already outlined to date regarding the university’s finances. We feel it’s a larger issue than we are just not being paid 2018 additional monies,” she told Demerara Waves Online News.

Thomas was mindful that if conciliation talks break down and the two sides reach a deadlock, they would have to go to arbitration. She said the union was keen on first ratcheting up public awareness about the plight of the academic and non-academic staff such as shortage of stationery and other supplies, and overflowing classrooms. “We seemed to have generated some national interest engagement. We shall see whether we can proceed to conciliation though it’s a step we think ultimately will not bear much fruit for the unions or the workers,” the UGSSA President said.

The UGSSA President noted that the university’s administration refused to go to conciliation last year, but “this year they’re rushing” to the Ministry of Labour.

Vice Chancellor Griffith said he was mindful of industrial action at UG spilling over into the political arena at the time Guyana appeared heading into general elections due to the National Assembly’s passage of a no-confidence motion on December 21, 2018. He appealed to the workers’ unions to go to conciliation, as they had agreed to, because “it’s not going to help disrupting classes further, creating a sense of disorder”. 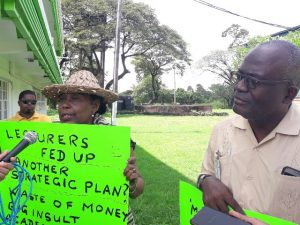 Treasurer of the UGSSA, Dr. Pat Francis and President of the University of Guyana Workers Union, Bruce Haynes.

UGWU President Bruce Haynes, however, said it was up to the authorities to prevent the industrial dispute from becoming politicised. “It would be used so if those who are going to be affected by this adverse publicity will have to take a serious step and intervene and to diffuse it because the University of Guyana Council is not and has not been very effective in dealing with this perennial issue that we have and to bring it to a closure,” he said.

Other grievances include wrongful accusations of larceny, public criticism of staff, and deprivation of the staff club and canteen.