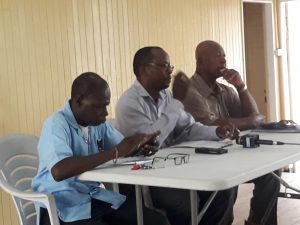 About 184 telecommunication industry pensioners on Friday slammed the Guyana Government for failing to ensure they are paid their correct pensions, in keeping with a 1990 agreement for the sale of the state-owned Guyana Telecommunications Corporation (GTC) to Atlantic Tele-Network (ATN).

The Guyana Postal and Telecommunications Workers Union (GPTWU)  said it would now be staging protests, seeking legal advice and also lobbying the governing coalition to keep its promise, while in opposition, to take the issue to a bipartisan select committee.

The retirees are arguing that based on the agreement that led to GTC’s sale to ATN and the formation of GT&T, a new entity, all the GTC workers who opted to continue with the ATN majority-owned GT&T would have had unbroken service and received their pensions from government based on their final salaries at retirement.

GPTWU President Harold Shepherd, in the presence of more than 40 pensioners, told a news conference that while the issue has been dragging on for more than 20 years, the union had been successful in getting an increase in the pension from the minimum of about GYD$22,000 to just over GYD$90,000 in 2016 when the coalition government rebased the pension. 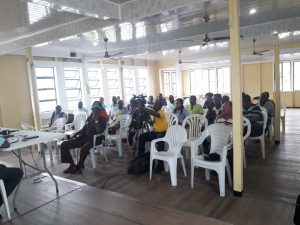 Retiree John Skeete said instead of calculating their rightfully due pension at their last salaries, the Ministry of Finance merely adjusted the minimum salary by looking at similar positions currently in the public sector.

By his rough calculation, the lowest paid retiree should receive a pension of GYD$90,000 and the highest paid, more than GYD$700,000.

Skeete accused the Government of treating the pensioners shabbily and making them feel like “spent match”. “We have a head and no sulphur” and “our members are dying” without their real benefits after working decades to develop Guyana’s telecommunication industry and patenting circuits for the political executive and national security, Skeete said.

The GPTWU President vowed his union’s “uphill battle” of securing a legal recourse.