Youths to lobby political parties for greater involvement and priority 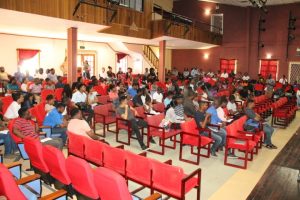 A loosely organised youth-driven forum on involvement in politics on Saturday concluded with a decision to lobby political parties on their needs, even as ideas were floated for greater parliamentary representation by youths and influencing election manifestos.

Addressing the well-attended event at the Theatre Guild in Georgetown, Glasgow said they would be fanning out across the country to “mobilise” opinion and also hold government accountable. He added that the group needs to be strategic as it reaches out to existing like-minded organisations.

The gathering appeared divided on whether they should evolve into a political party, pressure group or become members of established parties to influence change from within. 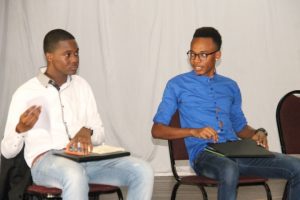 Edun Corbin and Dennis Glasgow, two of the organisers of the youth forum.

The free-flowing discussion did not touch on the constitutional controversy over the no-confidence motion that is now before the High Court, and the likelihood of general elections later this year.

A participant raised a concern about a lack of jobs for qualified persons, but that was quickly shot down by Edun Corbin who said self-employment opportunities are available and all that needs to be done is to become innovative and creative. He cited social media opportunities, and skills-based activities such as cooking.

Participant Nkosi Bruce raised concerns about the likelihood of youths’ ideas being ignored again as, according to him, had been the case after the May 2015 general elections. He also questioned the forum organisers on who should youths vote for if the political parties all accept ideas coming from youths.

“We have no guarantee that they are going to do it. We have seen from 2015 when certain parties campaigned against the background of promoting youth that they got into power and they completely disregarded youth and now we are at a point where these parties are going to be going up again for re-election and we are now saying we are going to put what we want,” Bruce told other participants. Among those present were Director of Sport at the Ministry of the Presidency’s Department of Social Cohesion, Christopher Jones, and Chairman of the People’s National Congress Reform’s youth arm, Ryan Belgrave.

Another participant said he would not be impressed by political parties that promise obvious responsibilities to  provide better roads, schools, and health care but would consider initiatives. “What are the initiatives that you are bringing to us as youths? That is my major question so to all the parties going to a campaign for the next elections- whether it is in 2019 or in 2020. What I am looking for is what are you bringing new outside of your responsibilities to us as youths,” said participant Clinton Duncan.

Just prior to the May 2015 general elections, a foreign-funded Vote Like A Boss campaign had targeted youths to get them to cast their ballots.

A number of the participants at the forum recommended the formation of a youth-centered political party in light of the fact that about 60 percent of Guyana’s population are youths. However, another advised that that would be too costly and would require commitment. 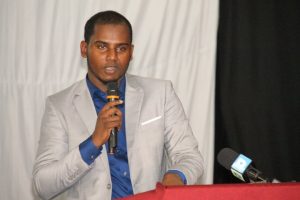 Dellon Charles recommended that young people position themselves to stimulate change inside political parties by joining their youth arms. “If we want to see the kind of change in our country, then we should not just be looking at it from a civil society perspective but we must engage those parties, we must join those parties, their youth arms and you grow from there so that is how I believe we can actually accomplish what we need to, not just making the recommendation – ‘oh you should do this’ – but be a part of the changes,” he said to loud applause.

Corbin agreed that it was better to re-engineer the existing political parties to serve Guyana instead of forming a new one at great cost. “Sometimes, we feel the best way to go forward is by starting afresh. That is not true…but you know the best thing to do sometimes is to to take those same broken systems we have and build them back because by ignoring those political systems, they are already entrenched. They make  Guyana what Guyana is today – PPP, PNCR, APNU, AFC, so creating something new is just to me like we are going to be expending a lot of time. I honestly believe we need to get in those organisations and fight it from inside. That’s the best way,” Corbin said to cheers.

Jermaine Grant voiced concern that a number of youths today were engaging in armchair activism instead of taking their grievances to the streets. “A lot of us in Guyana are so comfortable to often have forums to come and sit down in safe space rather than take it to the streets which is uncomfortable and confront the politicians. To me, we need to move to spaces that are far more effective than just sitting in a room,” he said. He recommended that the organisers of Saturday’s forum craft a youth accord or youth contract that would contain concerns instead of duplicating the national youth policy. “The youth accord or the youth contract is what you can use to say what is your aspiration, what aspires you; chronicle all your problems… then what is the solution you propose. That youth contract can be like an annexe to a manifesto,” he said. Grant urged youths to be “hawkish” to keep pressure on political parties in government who do not keep their promises.

Former 2016 local government election contestant, Cleon Halley also discouraged youths from establishing a new political party because campaigning for the next general elections would be too expensive. He cautioned against taking external financing from businesses as that could compromise the integrity of the party. “Moving forward from this gathering, the more realistic thing I see happening is a pressure group,” he said. Halley also suggested that youths refrain from spending on certain goods and services to secure desired change. “Think about 65 percent of the electorate who also have spending power, deciding that they are not going to spend willy-nilly if they want a certain change to occur; they are going to withhold spending on certain things, put pressure on the businessmen who are in turn going to put pressure on the government,” he said. Halley echoed Grant’s call for street protests as well as the boycott of certain events.

Other suggestions included retaining older and experienced politicians to orient their younger successors, hold authority accountable and appoint other youths in governmental positions.