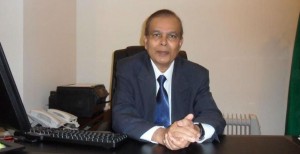 Guyana’s former Ambassador to Venezuela, the United States and Kuwait Odeen Ishamael CCH died on Saturday at his home in the southern United States, his brother said.

“It is with deep sadness that I inform you of the death of our brother Dr. Odeen Ishmael at his home in Ocala, Florida at 3.01 pm this afternoon,” his brother, Jamaladeen Ishmael told Demerara Waves Online News.

His brother said a date has not yet been fixed for Ambassador Ishmael’s funeral.

The former diplomat had been battling a rare incurable muscle disease for several years now.

Ishmael served as Guyana’s Ambassador to Venezuela from 1993 to 2003, to Venezuela from 2003 to 2011, and to Kuwait from 2011 to 2015. He had been also Guyana’s Permanent Representative to the Organization of American States (OAS).

Former Foreign Affairs Minister Clement Rohee, under whom Ambassador Ishmael had served, expressed deep sadness at the passing of the “accomplished diplomat, writer and academician”. “He contributed significantly to Guyana’s diplomatic outreach as well as him becoming aware of what Guyana has to offer. He was a self-made diplomat. He never got training as such in diplomacy but he developed it on his own and eventually he became a consummate diplomat and did a fantastic job and he was one of the advocates of economic diplomacy which we started out in 1992,” Rohee said.

Hailing from West Berbice, Ambassador Ishmael served as a primary and secondary school teacher as well as an Information Officer at the Ministry of Foreign Affairs.

The Cacique Crown of Honour (CCH) awardee had been also closely connected to the People’s Progressive Party’s youth arm and he was a “very good friend” of Ambassador to Cuba, Halim Majeed, Prime Minister Moses Nagamootoo, and the late former Presidential Advisor Navin Chandarpal.

The Ministry of the Presidency noted that Ambassador Ishmael authored several books inclusive of the Trail of Diplomacy – A Documentary History of the Guyana-Venezuela Border Issue.