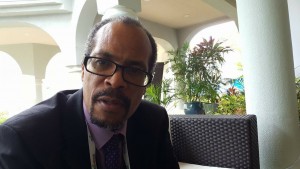 The Caribbean Regional Fisheries Mechanism (CRFM) is willing to assist Guyana in assessing whether offshore oil industry work is impacting on fish stock, but Guyana says it may be better for oil companies to collect the relevant data.

CRFM Executive Director, Milton Haughton said Guyana has not asked for help in that regard, but fishers in the rest of the region are worried about how oil exploration activities might be affecting the fishing industry. “What I can tell you is there is an increasing call from fishers regarding the negative impacts of seismic activities related to oil and gas exploration in the region and, indeed, scientific research have shown that the seismic research can indeed have negative impacts, particularly on fish larvae and fish eggs; it will stunt or kill them,” he told Demerara Waves Online News on the sidelines of the 2018 Caribbean Week of Agriculture held in Barbados.

Haughton said Guyana would have to first ask for assistance before the CRFM could “engage and assist” in the same way Jamaica had done several years ago in the wake of concerns by fishers there. The CRFM, he said, worked with Jamaica to help fashion an agreement for compensation if necessary.

Head of the Ministry of the Presidency’s Department of Energy, Mark Bynoe said he was aware that the CRFM is suffering from a shortage of resources to conduct such studies.  The Energy Department’s Head said he was unsure whether Guyana has a “good understanding” of its marine stock and other species that live in open sea areas. 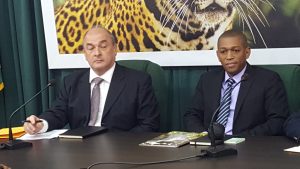 Oil and Gas Adviser at the Ministry of the Presidency’s Department of Energy, Matthew Wilks and Department Head, Dr Mark Bynoe (right).

“Coming from where I was, I can say we have to be careful about what we are asking the CRFM to provide because the CRFM itself has certain capacity constraints,” said Bynoe, a former deputy head of the Caribbean Community Climate Change Centre (CCCCC). Against that background, he said Guyana could ask the operators of the offshore concessions to supply additional information. “In short, what we can be doing, however, is leaning on the operators to provide us more information which is part of what is stipulated in the environmental and social impact assessments with regards to providing baseline data for us to better understand the resources with which we are asked to work so, in short, it’s important for us to understand what baseline we have and then to move forward from therer,” he said.

Bynoe said, nevertheless, the Energy Department and the Environmental Protection Agency (EPA) would be discussing ways of engaging the Belize-based CRFM. “That will fall within the whole aspect of the environment and social management plan in terms of what engagements and what possible assistance they can derive from the Caribbean Regional Fisheries Mechanism in terms of how the activities offshore are likely to impact on Guyana’s fishery reserves,” he said when asked by Demerara Waves Online News.

The CRFM Executive Director said fishers in Jamaica, and Trinidad and Tobago have been complaining that seismic activities have been adversely affecting the fish stock. He said the CRFM itself has not done any research to verify such complaints, but American scientists and fishers in the Caribbean have informed that seismic data gathering has been affecting the fish population.

“Our fishers in the region, who are at the forefront, have been telling us for some time that something is wrong whenever they have these exploration activities and seismic bounce. They do see a decline in fish and they believe there is an association so there is room for the monitoring of this and for taking these issues into consideration in developing an oil and gas industry,” he said.

Haughton said the Jamaican government and oil exploration companies have signed agreements that include provision for compensation to fishers if they are negatively affected by exploration and development activities in the oil and gas sector. “There are ways of addressing this and the agreement between Jamaica and the exploration companies is something we may need to look at for other areas that are likely to have this conflict and also putting mechanisms- you have dialogue- so that when the companies are doing exploration and development that they can take into account the concerns of fishers and the concerns of the environment in making their final decisions,” he said.

The Caribbean Regional Fisheries Mechanism (CRFM) was officially inaugurated on 27 March 2003, in Belize City, Belize, where it is headquartered, following the signing of the “Agreement Establishing the CRFM” on February 4, 2002. It is an inter-governmental organization with its mission being to “To promote and facilitate the responsible utilization of the region’s fisheries and other aquatic resources for the economic and social benefits of the current and future population of the region”.

The CRFM consist of three bodies – the Ministerial Council; the Caribbean Fisheries Forum; and the CRFM Secretariat. Its members are Anguilla, Antigua and Barbuda, The Bahamas, Barbados, Belize, Dominica, Grenada, Guyana, Haiti, Jamaica, Montserrat, St. Kitts and Nevis, St. Lucia, St. Vincent and the Grenadines, Suriname, Trinidad and Tobago and the Turks and Caicos Islands