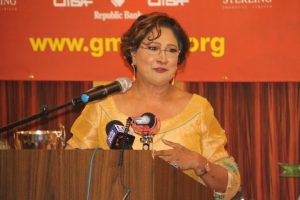 Addressing the Guyana Manufacturing and Services Association Awards and Dinner, the Opposition Leader also warned Guyana against establishing a state oil company because firing workers would be harder compared to a privately-owned entity. “With all state enterprises, there is a view by the workers that they are entitled to the jobs, and of course they are, but when there are no other jobs except those jobs, they are entitled to those jobs at those rates and those salaries and, therefore, when you take action, you could  get a real backlash as a government,” she said. She also noted that state-owned companies find it “very difficult” to engage in innovation and productive capacity.

At the same time, she indicated that the recent closure of the state-owned Petroleum Company of Trinidad and Tobago (Petrotrin)  sees her country importing fuels and exporting crude and so making the twin-island nation energy insecure and more vulnerable to a very “volatile sector that is tied to the vagaries of international superpowers that will now control our energy requirements and outputs.” In that regard, she said Guyana, as an oil producing nation should guard against becoming energy insecure. “I’m hopeful and fairly certain that this one part that Guyana should never find itself on. Guyana should, of all other things, especially having been an importer of energy yourself for so long, you should work towards ensuring energy security and energy independence. We have just surrendered energy security by decisions taken with respect to Petrotrin. I urge you never to do that. These are critical to your country’s success and your future,” she said.

Touching on climate change, she said Guyana should also take advantage of electricity generation opportunities from wind, solar and water including the Amaila Falls Hydropower project that was abandoned by the David Granger-led administration over concerns about its financing and viability.

She said it was time the Guyana government, opposition, private sector, trade unions, civil society and the private sector form think-tanks to hammer out a policy on how to spend  some of the oil revenues for the next seven generations. “The first thing I would recommend is that at the leadership governmental levels, that needs to be based on a national vision for the improvement of the lives of all of your citizens. To this end, I would recommend you develop a national policy for the development of Guyana,” she said. Britain has already offered to help Guyana revive its more than 10-year old home-grown National Development Strategy.

For her part, she recommended that a portion of the oil money be spent on improving physical infrastructure such as road and railways, improving electricity as well as investing in health care, including hospitals, and training Guyanese. In the area of training, she made a pitch for Guyanese to pursue higher specialised education in a  range of areas including petroleum engineering at the St. Augustine, Trinidad campus of the University of the West Indies.

Some of the oil revenues, the Trinidad and Tobago Opposition Leader recommended, should be re-invested in more oil exploration.

The former leader of the once oil-rich Caribbean nation advised Guyana to hire experts to negotiate lucrative contracts now instead of inking bad deals that could not be changed because of the need to respect the sanctity of contracts. “You need to be fair and firm. You must ensure that Guyana gets the best possible deal. It is important, also, that your negotiators are the best in class and highly specialised in their fields of expertise,” she said.

Further, she urged Guyana to negotiate proper prices. “Negotiations on pricing are very highly complex and indeed controversial issues. With this in mind, it must be foremost in the minds of legislators and negotiators that one does not often have an opportunity to return to the bargaining table when the ink dries on the contracts. In today’s world of tedious litigation, it must be noted that negotiations on pricing must be well-researched and well-prepared. The heart of these negotiations must always be that the people of Guyana are getting the best deal for their patrimony-that is the oil and gas from your lands,” the opposition leader added.

In dealing with the less vulnerable, she said leaders would need to make bold decisions while having social safety nets to avoid Guyana becoming a country of haves and have-nots.

On the matter of a Sovereign Wealth Fund, the Trinidad and Tobago Opposition Leader said Guyana could learn from her country by putting in place provisions to prevent the spending of monies from that fund on recurrent expenditures and bridging budget deficits.