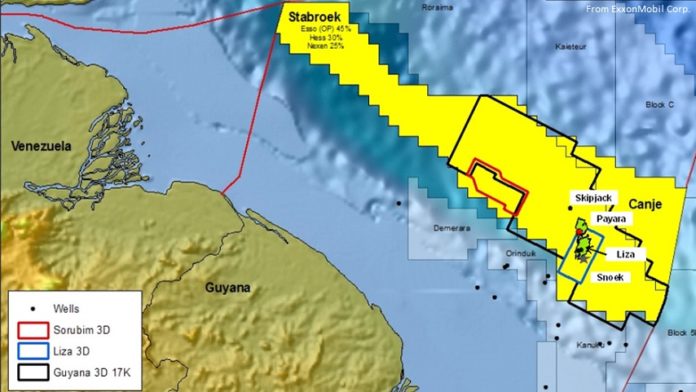 Oil companies interested in acquiring concessions, including those in ultra deep waters, will have to wait until early 2020 by which time the country is expected to have a model Production Sharing Agreement (PSA) and upgraded laws, officials said Thursday.

Head of the Ministry of the Presidency’s Department of Energy, Dr. Mark Bynoe said government was in no hurry to hand out more oil blocks until a model agreement and legislation have been overhauled.

“We do understand that there is significant interest in Block C and we are not anxious to allocate Block C just yet until we have these complementary pieces in place…such as your model PSA, revision to the legislation and so forth. Therefore, we do not envisage a possible licensing round maybe till early 2020 and that’s being realistic in terms of where we are going,” he told a news conference held at the Ministry of the Presidency.

Block C, which is located off the Canje Block in ultra deep waters, is estimated to be about 8,000 square kilometres. Among the companies that have shown an interest are REPSOL,  Shell and ExxonMobil, according to usually reliable sources.

While major oil companies such as Tullow, TOTAL, Anadarko and ExxonMobil already having offshore concessions, government disagreed the Guyana basin has been de-risked. “When people say it has been de-risked; no, a very small portion has been de-risked,” he said. “Yes, Exxon has done some amount of appraisal and development work now going forward but there are still significant areas in deep water that have not been de-risked- nearshore: in fact little or no activity; onshore: no activity at all so in short what we are aiming at is to look at what currently obtains and i build on that,” he added. With lower interest being shown in shallow and onshore areas of Guyana, the Energy Department’s Head said government was considering offering data packages to stimulate investor interest in those areas.

On the thorny question of the stabilisation clause in the Production Sharing Agreement between Guyana and the ExxonMobil-controlled Esso Exploration and Production Guyana Ltd (EEPGL); Oil and Gas Adviser at the Department of Energy, Matthew Wilks indicated that was because the rest of Guyana’s legislation was weak and companies want to protect their legislation based on perception and risk.

Referring to the PSA with EEPGL, he said that deal “may not be excellent but it’s not very poor either”. On the question of whether the contract would be renegotiated, he said Guyana respects the sanctity of contracts but at the same time would keep an eye on their evolution “to ensure that the value proposition to Guyana increases”.

Oil and Gas Adviser Wilks said model contracts, such as Guyana’s, vary based on the objective of attracting investment. “You can have the most advantageous contract for the government doesn’t mean that people will invest and, in fact, in many locations the experience is that you have to balance the contract. It is no use having the most aggressive contract of the government in the world if no one invests,” he said.

Wilks said companies would not be affected by new legislation, but would have to comply with the laws that were in force at the time the contract was signed.

The Department of Energy says has been working closely with the Environmental Protection Agency, Guyana Revenue Authority and Auditor General’s Office.