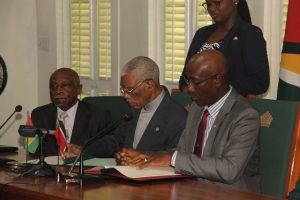 President David Granger and Prime Minister of Trinidad and Tobago, Keith Rowley signing a memorandum of understanding on cooperation in the energy sector.

Trinidad and Tobago’s Prime Minister, Keith Rowley and the President of Guyana, David Granger on Wednesday dismissed concerns by sections of the Guyanese private sector that a memorandum of understanding in energy they signed would see businesses from the twin-island nation taking over the business landscape.

In clear references to concerns  that were flagged by the Georgetown Chamber of Commerce and Industry (GCCI)  that the MoU would see a flood of Trinidad and Tobago businesses to take advantage of Guyana’s emerging oil and gas sector, Rowley said that was “disappointing”.

For his part, President Granger said Guyana stands to benefit from Trinidad and Tobago’s estimated 100 years of experience in the hydrocarbon sector in areas of production, marketing, dealing with oil spills and and international corporations. The Guyanese leader bluntly rejected claims of a sellout.

“There is no sellout. There are some unjustified fears that Guyana is giving away the family jewels but that can’t be true. It is simply a means of collaborating…. The fears  that there is some giveaway are completely unjustified,” he said.

Stressing that the document of intent was simply a “good neighbour” having a need for Trinidad’s presence and possibly finance and entrepreneurial skills, the Trinidad and Tobago Prime Minister reminded that it had helped bail out Guyana from its Highly Indebted Poor Country status by writing off of billions of Trinidad and Tobago dollars in debt. “That write-off was done against the background of Trinidad and Tobago being encouraged and, as a matter of fact, we did so against pressures and we are not holding that as any quid pro quo (a favour in return). We are treating that as circumstantial and we maintain our position that we are a friendly cooperating neighbour of Guyana and the people of Guyana and the people of Trinidad and Tobago have a lot in common and hopefully a lot of road to travel together,” said Rowley at a news conference he shared with Granger at State House.

After intense criticisms of its initial stance on the now signed Guyana- Trinidad & Tobago MoU, the Georgetown Chamber of Commerce and Industry days later backed down and said it welcomed investors from that twin-island nation.

The Ministry of Citizenship and Immigration has already reported that numerous nationals of Trinidad and Tobago have been coming here to take up job opportunities.

2018-09-19
Denis Chabrol
Previous: Updated: Mentally ill suspected rapist killed self with rat poison while in police lockup
Next: Oil and gas contracts can be renegotiated- Trinidad and Tobago Prime Minister