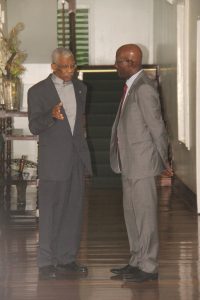 THE REAL BILATERAL TALKS: President David Granger and Trinidad and Tobago’s Prime Minister, Keith Rowley spoke with each other for at least 20 minutes outside the conference room away from the glare of their respective ministerial delegations before they briefed the media.

Trinidad and Tobago’s Prime Minister, Keith Rowley on Wednesday said his country has successfully renegotiated contracts with international oil and gas companies, even as he cautioned that  deals are developed based on the conditions at a particular time.

“We respect the sanctity of contracts, while not accepting that contracts are written in stone. Contracts are engagements made at least between two parties or more and when you make contracts, if there is goodwill between the participants, and if the intention is for both participants to benefit from the nature of the contract, we see that opportunity and the possibility of contracts being revisited so as to maintain that balance of the elements of the contracts and that is the basis on which we have approached the multinationals and we do so out of respect and we do so out of competence,” he told a news briefing following the signing of a memorandum of understanding with President David Granger at State House.

Rowley’s comments came against the backdrop of lingering concerns about whether Guyana got the best deal from ExxonMobil especially in the areas of the signing bonus, settlement of pre-contract costs, a cap on taxes, duty free concessions and the two percent royalty.

The David Granger-led administration has renegotiated the 1999 Production Sharing Agreement that provides for an increase in the annual rental fee from US$240,000 to US$1 million; training from US$45,000 to US$300,000 and a new allocation of US$300,000 for social and environmental programmes as well as a 2% royalty.

The Trinidad and Tobago Prime Minister said international corporations and representatives of his government “are at the negotiating table” after the businesses have acknowledged that the contracts could be examined to maintain the balance. “We do this by negotiations and we are engaged in negotiations. Sometimes, in negotiations you have to point out shortcomings on the part of others and they might point out shortcomings on your part but we have no fear in raising our dissatisfaction with the performance of certain contracts,” he said.

Rowley noted that contracts are crafted to encourage or continue participation or reap certain benefits based on market changes. “If you are in the wilderness and you want to attract an orchestra, you may have to agree to certain terms,” he said.

Top Guyana government and industry officials have defended the Production Sharing Agreement between the ExxonMobil-controlled Esso Exploration and Production (Guyana) Limited and government back in 1999 because no oil had been discovered then and the country had been doing its best to attract investors.

The 2016 revision of the contract and the US$18 million signature bonus were done only after the discovery of oil in commercial quantities at the Liza well in 2015. Since then, eight other discoveries offshore Guyana have been made, with a projection of almost 800,000 barrels per day production.

Rowley advised Guyana to understand “where you’re at in the time and place”, even as he offered experts and companies in the hydrocarbon industry.