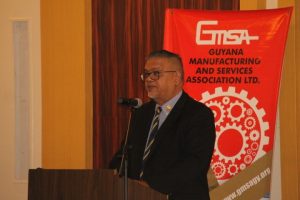 Board member of the Guyana Manufacturing and Services Association, Ramesh Dookhoo.

A senior official of Guyana’s Private Sector Commission (PSC) has called on Guyanese to stop beating up on the United States (US) oil major, ExxonMobil, days before American Ambassador Perry Holloway called on locals to unite around the expected oil wealth.

“I would also like to say to all of Guyana, let us take it a little easy, as we say in Guyanese parlance, on Exxon. They are a company that has come into Guyana with good intentions. If we screw it up, is our fault. Let us stop unduly haranguing the company,” board member of the Guyana Manufacturing and Services Association (GMSA), Ramesh Dookhoo.

The veteran private sector leader told the GMSA’s luncheon on Tuesday that ExxonMobil is part of Guyana’s private sector. That business organisation, he announced, has plans to “raise the bar” for intelligent discussions.

Addressing a reception at the Marriott Hotel to mark American Independence Day, US Ambassador Holloway  credited Guyana with doing a lot of the required things, but Guyanese need to come together to do more.  “In spite of all the negative press, in spite of all the angst, in spite of all the uncertainty Guyana’s future looks brighter now than ever before  because of future oil production. This discovery of oil offshore is really big, big, big- notice three bigs, big deal- and everyone needs to take it seriously and get smarter on the issue because, while the government of Guyana is doing many of the things that need to be done, much more will need to be done,”  Holloway said. 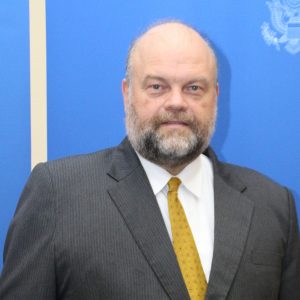 Several commentators and sections of the media have been lambasting the Guyana government and ExxonMobil for giving Guyana a bad deal that would see low royalty, less than satisfactory profit oil and a paltry US$18 million signing bonus. There are also concerns that Guyana will have to make several other payments on behalf of the company that will cream off more revenue that could have gone to the National Treasury.

Holloway said for the first time Guyana will get a huge windfall of revenue “to do the things that need to be done” but that did not mean that political and corporate governance must be ignored. In apparent reference to the sometimes controversial ExxonMobil-Guyana Production Sharing Agreement, he called on Guyanese to generate fact-based analysis.

“As in any democracy, you need to hold duly elected officials accountable as well as domestic and international companies operating in one’s country. That said, you also need to analyse and make decisions on facts and reality, not fiction and surrealism,” he said.  Holloway noted that the Agreement that was negotiated by the previous government in 1999 was the best that could have been secured based on exploration results over time and oil markets at the time.  The revised 2016 agreement by the current government, he said, were all to Guyana’s benefit, more so since eight out of the 10 oil wells have proven to contain significant oil reserves. “There is no scenario after initial investments are recovered, which is a reasonable expectation in a partnership will Guyana get less money than its partners and maybe that’s not the world’s best still, but surely Guyana getting more money than its partner cannot be considered a horrible deal,” he said.

With the confirmed oil reserves  already having put Guyana among the top 25 countries ahead of countries like the United Kingdom, Colombia, and Trinidad and Tobago.  The company has so far estimated that all of the discoveries in Guyana so far total 3.2 billion barrels of oil equivalent, poising the country to surpass Norway if more oil is found.

“This is serious business people,” he said.

Holloway highlighted that when Guyana begins commercial oil production in March, 2020 at a rate of 120,000 barrels per day, that would be more than from all of the 100 oil wells in Trinidad and Tobago. “This is really serious stuff. Someone needs to probably write a soca song about that statistic,” he said. ExxonMobil has already projected that Guyana could eventually produce 500,000 barrels per day.

The American envoy said Guyana’s immediate hurdle is how to spend the huge amounts of cash that the emerging oil and gas economy will generate, but “if things go right Guyana will be more secure, prosperous and inclusive”.

The US continues to hope that much of the funds would be invested in infrastructural and social sector development as well as saving a huge chunk in a Sovereign Wealth Fund.

2018-07-12
Denis Chabrol
Previous: American Chamber of Commerce comes to Guyana
Next: Broomes refuses to speak on parking lot fracas; “We didn’t come into government for issues like this. We came into make changes”- Volda Lawrence