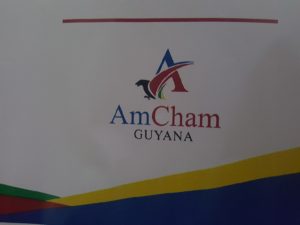 He said AMCHAM Guyana is expected to set up shop by August, 2018. “The first ever official American Chamber of Commerce will begin operations in Guyana,” he told a reception at the Marriott Hotel mark American Independence Day.

“This is a great initiative that will help our two countries,” he added. The American Chamber is coming to Guyana as an increasing number of US companies establish a foothold here to capitalise on the growing oil industry which is set to produce more oil than Trinidad and Tobago when Liza Phase One begins pumping 120,000 barrels per say from March, 2020.

AMCHAM says it is a voluntary association of US enterprises and individuals doing business in a given country as well as firms and business executives of that country who operate in the US. AMCHAM says it can be a “collective patform for advocacy surrounding business needs and policies relating to trade” as well as “key clearinghouse on information relating to trade, investment and commerce and an information centre for customs duties, tariffs and regulations”

The business organisation, which is expected to have a seat on Guyana’s Private Sector Commission, says it plans to promote America-Guyana trade and business, create new opportunities and improve market access for America-Guyana goods and services..

The provision of an economic, social and policy platform for its members, encouragement of networking and building valuable business connections as well as the furtherance of American business interests in Guyana , and the promotion of corporate social responsibility and sustainable development, the organisation says, form part of its purpose.

AMCHAM’s affiliates in the Caribbean include those in Trinidad and Tobago,  Jamaica and Haiti.

AMCHAM Guyana can be contacted at [email protected]