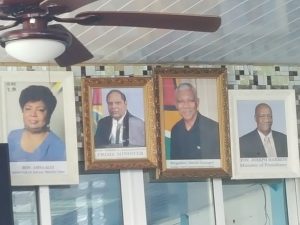 General Secretary of the People’s National Congress Reform (PNCR), Amna Ally on Wednesday said if the reported account of an altercation between Junior Minister of Natural Resources and two security guards at an East Bank Demerara restaurant’s parking lot is factual, then the incident is “unfortunate”.

“Of course, if it is that something took place as is reported, it’s unfortunate, very unfortunate. Something like that shouldn’t happen because we have to be able to follow rules and so on but I don’t know who is right and who is wrong,” said Ally.

The PNCR said she might seek an explanation from Broomes about the incident that occurred at the parking lot of New Thriving Restaurant, Providence, East Bank Demerara. The guards have denied Broomes’ allegation that one of them cocked his service shotgun and pointed it at her. However, available surveillance video footage does not show that aspect of the allegation. Instead, the footage shows Broomes removing the traffic cones and her vehicle driving over it.

Ally declined to say whether Broomes should apologise to the guards unless she knew all of the facts about the fracas, and said that PNCR Vice Chairperson, Volda Lawrence’s apology to one of the guards was on behalf of the party.

“I haven’t seen the video but I know Minister Lawrence offered an apology on behalf of the party if something like that took place,” Ally said.

When told that Lawrence said that apology was on her own behalf, Ally said, “well, it’s an apology offered and you know I haven’t been there, I don’t know what took place.” 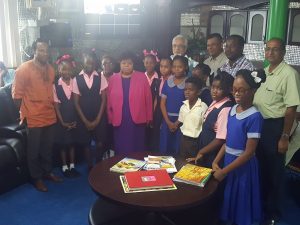 PNCR General Secretary, Amna Ally, Brian Tiwari and Region 10 government parliamentarian, among others, with the students who benefited from the donation.

She made her comments as she was leaving BK International’s headquarters where Chief Executive Officer, Brian Tiwari presented donations to several Region 10 students for excelling at the 2018 National Grade Six Assessment.

Minister of State Joseph Harmon was also expected to be present, but he did not turn up.

Ally, in her remarks, congratulated the students and welcomed Tiwari’s cash contribution of GY$1.5 million in response to a promise made by Harmon during a recent visit to Linden. “As you know, this fund started with Mr. Joe Harmon in Linden when he was there a few days ago, I think it might have been Sunday, and they were able to raise over a million dollars and here, Mr. Tiwari and Mr Chan are boosting that up with another 1.5 million. We are extremely, extremely happy. Thank you Mr. Chan, thank you Mr. Tiwari,” said Ally, a retired educator.

Tiwari is said to be Harmon’s longtime close friend. If Harmon had attended Wednesday’s event, it would have been the second time that he and Ally would have been at an event in less than two weeks.

The PNCR General Secretary declined to say which of the three candidates- incumbent Basil Williams, Volda Lawrence or Joseph Harmon- she is backing for their party’s chairmanship at next month’s biennial delegates conference at which the the Central Executive would be elected.

“I am the General Secretary of the party and so I cannot back anybody. Whoever emerges as the winner, I will be working with that person. You see, all three persons are seasoned senior politicians; very responsible and excellent candidates so I will not take a pick,” she said.

Broomes, who has been criticised on Facebook and called on to apoologise so far has not given any inkling of doing so and has stayed away from commenting on the incident on her Facebook Page. Police said they were still investigating.

Broomes is openly campaigning for Harmon to cop the PNCR’s chairmanship.