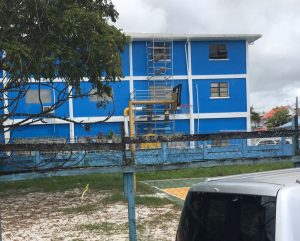 The Guyana Gold Board (GGB) has moved from Brickdam, Georgetown to Crown Street,  Queenstown, and already the semi-autonomous agency has had to quell concerns that the ‘gold burning’ facility there would sicken residents with mercury emissions.

In a newspaper notice, the GGB told gold miners, licenced dealers and the general public that it has moved from the Guyana Geology and Mines Commission (GGMC) compound to Crown and Albert Streets from July 3, 2018.Already, a nearby resident said he was concerned that the mercury containment system was located in a residential area and nearby nursery and primary schools.

The resident would not rule out himself and colleagues mobilising against the location of the system. Lall countered, saying that there are number of other facilities in Georgetown where gold is being burned.

The Gold Board does not use mercury, but burns the precious yellow metal taken there by miners to remove mercury and other impurities,

GGB Chairman, Gabriel Lall told Demerara Waves Online News that the brand new mercury control system, which costs tens of millions of dollars, would be operated and maintained in accordance with the standards set by the manufacturers. “Right now, I am concerned with the Gold Board. What I can say in terms of this is that every precaution that will meet every safety standard will be adhered to,” he said. Quizzed on whether the GGB has the personnel and technology, he said the system’s manufacturer is “going to guide us with that”.

He said burning of raw gold for sale to the Board would not begin until clearance is obtained from engineers, chemists and other experts. He added that personnel from the National Advisory Board on Occupational Safety and Health, Environmental Protection Agency and others would be involved in the process.

Lall said a team from the Pan American Health Organisation/World Health Organisation (PAHO-WHO) team has already seen the new system and plans to dispatch a number of recommendations to make the equipment “even better”. “That is a control system which we are spending a lot of money on because health and safety are paramount for us and we want to do this right,” he said.

Asked how the system would prevent mercury emissions into the atmosphere, the GGB Chairman indicated that the equipment is high-tech. “My understanding from the experts is that because of the number of control features, the monitoring that has to be done, it is going to be pretty robust meaning that it will be well within safety limits,” he said.

When the GGB’s gold burning facility had become defective, several GGMC staffers had fallen ill. Tests had shown that a number of their mercury levels had been very high. A number of the GGMC workers were said to be still taking medication and vitamins.

After many GGMC workers had been sent on leave to take treatment and others had refused to resume duties, the Gold Board had secured the services of Pure Diamond, Duncan Street, Bel Air Park to remove amalgam from gold to be sold to the Board.