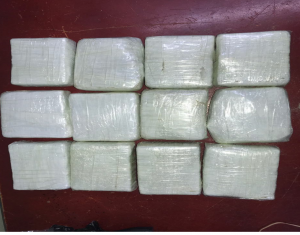 Five men, including a shipper, on Tuesday, remained in custody after Customs Anti-Narcotics Unit (CANU) agents said they found several packets of cocaine under a vehicle at Cheddi Jagan International Airport

CANU said on July 2, 2018 at 11 O’clock Monday night the men, including,  shipper Navindra Sarwan, were arrested in relation to suspected cocaine found under the vehicle of the said shipper while the vehicle was parked inside the compound of the CAMEX Bond CJIA Timheri.

“The said shipper was scheduled to ship ground provision and pumpkins on a cargo flight OJ 258 destined for Canada,” CANU said

The suspected cocaine weighed over 7kgs.

Meanwhie, a woman named Natasha Blair who was booked to travel on BW 726 to JFK New York on Caricom Day Monday 2nd July 2018 through CJIA was held after she excreted cocaine pellets.

At approximately 22:00hours yesterday evening she checked in her luggage and whilst on her way to the departure lounge she was intercepted by CANU Ranks who escorted her to a City hospital where suspected cocaine pellets were displayed in her digestive tract on  an x-ray and as well an object inserted in her lower extremity was also observed.

She was admitted as a patient and has since extracted one large object suspected to contain cocaine that was observed in her lower extremity. Regarding the ingested pellets seen in her digestive tract she has so-far excreted 3 suspected cocaine pellets and remains hospitalised.

This suspect is the mother of an 11month old baby girl with whom she was travelling when she was intercepted. The baby has since been handed over to her grandmother, CANU said.

CANU is now in search of the suspect’s child father of the said woman a: SHERWIN STOBY also known as KONG last of 87 Roxanne Burnham Gardens Georgetown Guyana, anyone knowing his whereabouts are asked to contact CANU at 227-3507