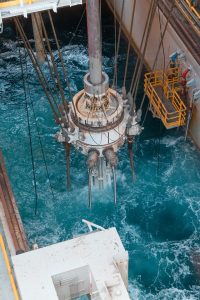 United States (US) oil giant, ExxonMobil, on Friday announced that its latest exploration well offshore Guyana has not yielded oil in commercial quantities- the second out of a total of eight wells drilled at the Stabroek Block so far.

The announcement was made by ExxonMobil’s Vice President and Secretary, Jeff Woodbury during its first quarter 2018 earnings call.

“The Soribrum well reached total depth this week but failed to encounter commercial quantities of hyrdrocarbons,” he said.

The drill-ship, Noble Bob Douglas, had drilled at that location about 83 nautical miles offshore, ahead of its planned preparations to extract oil commercially from Liza Phase One from 2020. ”

ExxonMobil began drilling the Sorubim well on the Stabroek Block on April 3, 2018. The Bob Douglas will complete this well and then move to begin drilling the Liza Phase 1 wells, the company said.

Woodbury said additional drilling is planned later this year as “we continue to explore the full potential of the Stabroek Block”.

Sorubim’s poor performance is the only the second well to have turned up almost dry since ExxonMobil and its partners in Esso Exploration Production Guyana Limited began exploratory drilling in the Stabroek Block.  No oil was found at SkipJack-1 in September, 2016.

ExxonMobil’s office in Guyana said, “unfortunately, the well did not encounter commercial quantities of hydrocarbons.  Exploration wells come with a certain amount of risk and this is particularly true in frontier areas like Guyana.  Success is not guaranteed”.

About 3.2 billion barrels of commercially proven reserves have been found at Liza, Payara, Liza Deep, Snoek, Turbot and Ranger.

The company said the Stena Carron drill ship will continue to explore and evaluate other areas of the block.  The Stena Carron is currently drilling the Liza 5 well, which will likely be followed by a new prospect, called Long Tail.