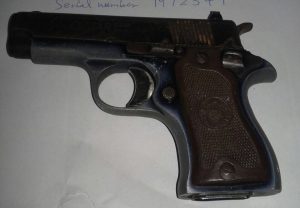 The .380 Starr pistol that police said they seized from a labourer at Leopold Street, Georgetown.

East Demerara Divisional Commander, Senior Superintendent Edmond Cooper told Demerara Waves Online News that immediately after the man reported that he was robbed of a gold ring and a gold chain, police patrols were alerted.

Cooper said the suspects were intercepted at Vryheid’s Lust Public Road. They sustained injuries after they fell off the motorcycle they were travelling on. They have been admitted to the Georgetown Public Hospital under police guard.

Cooper said a Glock pistol was seized from one of the men.

“That would help us in dealing with the others (robberies) because the trend is the same. There is a likelihood that they were involved in the others,” he said.

The robbery victim, according to Cooper, positively identified the alleged perpetrators.

Police have been receiving reports of robberies in which two men on a motorbike would approach persons at gunpoint and demand valuables.

Meanwhile, police also reported that a 34 year old labourer of ‘B’ field Sophia, after police found one .380 Starr Pistol about 2 AM Thursday at Leopold Street, Georgetown.

The suspect was in a Toyota Premio motorcar, when he was intercepted by police.