Aurora Goldmines says all its gold is declared 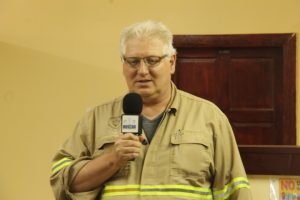 Aurora Gold Mines/ Guyana Goldfields on Sunday rejected suggestions that all of the gold produced is not declared.

Officials said the vault in the refinery is under tight video surveillance and those who have access to the combination lock codes for the vault are 90 percent Guyanese.

Administration Manager, Peter Benny said representatives of the Guyana Gold Board, Guyana Geology and Mines Commission and the Guyana Revenue Authority go to gold mine once monthly for the declaration and collection of gold bars at an average of 5,000 ounces per month. “They come to verify, they stamp it, they tag it and they accompany it,” he said.

“Whatever we produce is stored, is numbered and stored,” said Benny, who recalled that there had been a lot of complaints against Omai Gold Mines -“that the expats, the white people were stealing the gold” but only persons who do not understand the system would level such claims.

Asked whether the production at the point of gold pouring into bars is recorded electronically or manually, Assistant General Manager of Aurora Goldmines/ Guyana Goldfields, Vic Rozon said the final process is measured manually. “The final process for gold is manual. You have to physically weigh it. It’s physical, we are not measuring liquids, we are measuring solid. We can’t do that…The bar that we poured, is weighed, recorded and documented and witnessed by multiple people,” he said.

Guyana Goldfields produced 160,500 ounces of gold last year at Aurora Gold Mine with a gross revenue of US$199.5 million of which eight percent was paid to the government as royalty.

Benny said there had been instances in which workers at Omai Gold Mines had stolen the precious metal, but he could not see how that would be possible at Aurora.

2018-03-25
Denis Chabrol
Previous: Update: Suspected bandit admits to other robberies, hands over weapons; accomplices on the run
Next: “We will assure that our people can work safely underground”- Aurora Gold Mines official