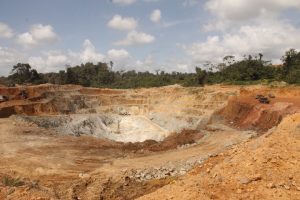 Mad Kiss pit from where the underground mining pit would be drilled and blasted to Rory’s Knoll where there is a 2.2 million ounce gold deposit waiting to be extracted.

Aurora Gold Mines (AGM) on Sunday assured that its planned underground mining would include safeguards against a collapse of the tunnel  leading to the gold deposit of more than two million ounces.

“That begins with geotechnical engineers determining how wide we can mine without a collapse so we engineer the solution and we also put roof bolts into the top and we can vary how close or far apart those roof bolts are, the length of the roof bolt and then we can put wire mesh so depending on the ground conditions.

There are many different types of ground support we use but it’s all engineered and we test those roof bolts to determine how much stress or how much pressure they will take so in that we will assure that our people can work  safely underground,” Mine Manager, Clyde Gillespie told reporters during a tour of the mines site.

Miners are not expected to reach the gold-bearing ore until another year. Estimated yield is about three grammes per ton. 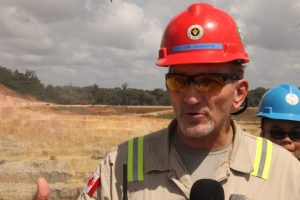 He said the tests were currently underway, and already the company has already ascertained the width and the ground control bolting plan.

The company has already decided to drill and blast to create the tunnel to reach the gold deposit amounting to 2.2 million ounces of gold located at about 1.2 kilometers below sea level.

The company said contractors would initially be hired to begin the underground work and train Guyanese to be drillers, loader operators and truck operators.

“This type of deposit extends for a very long way underground. We are not drilled out to the full extent right now but at some point the economics will determine how deep we can actually go for this main ore body,” a company official told reporters.

The company said underground mining would extend the life of the mine located just off the Cuyuni River to 2033.

The company official says investments in remaining open pit mining as well as underground mining would amount to US$599 million from 2018 to 2033.

Open pit mining at Rory’s Knoll is expected to continue for the next three and half years, smaller pits to 2031 and then underground mining would begin in 2018 and last until 2033.