Update: Suspected bandit admits to other robberies, hands over weapons; accomplices on the run 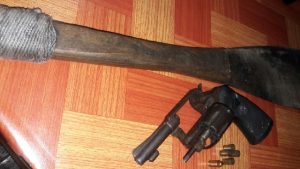 A revolver, several rounds and a cutlass that police said they recovered during an investigation of an armed robbery at Albion, Corentyne,

A labourer was Saturday night shot and robbed of three cellular phone and other articles while he was at his home at High Reef, Albion, Corentyne, police said.

One of the suspects was arrested shortly afterwards, and the Guyana Police Force said the man has admitted to committing other robberies. “The arrested suspect has also admitted to have committed two recent robberies and investigators have already arrested a salesman from Ankerville, Port Mourant for receiving stolen property ; an item stolen from one of the previous robberies, was found in his possession,” police said.

Police said they were also searching for three other accomplices who were involved in Saturday night’s robbery that occurred at High Reef Albion,Corentyne.

Investigators were told that the 36-year old man received gunshot injuries to his right hand and right side ribs. He underwent emergency surgery at the New Amsterdam Public Hospital and police said he was in a stable condition.

Police said they responded promptly and based on information gathered, the ranks went to a location at Topoo, Albion,Corentyne and arrested a 22 year-old suspect in whose possession a black T-shirt which looks similar to the one used to conceal the suspect’s face during the commission of the crime, was found in his crotch.

“The suspect has since admitted to the crime, revealed the identities of his accomplices and led investigators to an area a short distance from where he was apprehended and handed over the following: A .32 Revolver with two live rounds and four spent shells, two bicycles and a cutlass,” police said.

Investigators said the victim and other relatives were sitting under his house when the suspects,one armed with a handgun and two with cutlasses pounced ,demanded cash and jewelry and relieved the victim of the valuables.

During the robbery, according to  the victim, he resisted the bandits and the armed suspect discharged four rounds in his direction and they fled the scene.

2018-03-25
Denis Chabrol
Previous: Don’t be “distracted by that tiny, vocal minority” on the oil contract- Business Minister
Next: Aurora Goldmines says all its gold is declared