Don’t be “distracted by that tiny, vocal minority” on the oil contract- Business Minister 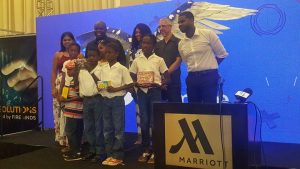 Chief Executive Officer of Guyana Telephone and Telegraph, Justin Nedd (second from left in back row) and Minister of Business, Dominic Gaskin (second from right in back row) with a number of youths who received technology-relevant gifts at Innova8

Minister of Business, Dominic Gaskin on Saturday urged Guyanese to ignore the “vocal minority” who has been persistently heaping criticisms on Guyana oil’s contract with ExxonMobil.

“A lot has already been said and the debate still rages on but I can say in all sincerity that our government will ensure that the Guyanese people become the beneficiaries of our country’s natural wealth and I want to urge you all to pay attention to the real developments that are taking place and not become distracted by that tiny, vocal minority who seem bent on killing the enthusiasm that we all need to energise us into being given the right choices and preparing ourselves for what lies ahead,” Gaskin said.

The Business Minister’s call comes against the background of daily criticisms of the ExxonMobil contract by a small group of persons.

Except for Attorney-at-Law, Charles Ramson Jr; none of the other critics or their representatives was present at any of the three events that were opened to the media and other stakeholders at the Pegasus Hotel and the Theatre Guild where foreign experts briefed attendees about the legal, administrative and economic implications of the ExxonMobil contract for Guyana.

Well-known commentator, Ramon Gaskin’s appeal of a High Court decision to throw out an application for a temporary order against oil companies, Hess and Nexen, because they did not obtain separate environmental permits has already drawn a reaction from government. The Ministry of Natural Resources said it was satisfied that no law was violated and that it was prepared to defend its decisions before a court of competent jurisdiction.

Other oil contract critics, who have raised serious concerns about the Production Sharing Agreement, include Chartered Accountants, Nigel Hinds and Christopher Ram, and Attorney-at-Law, Melinda Jankie and the privately-owned Kaieteur News.

Meanwhile, GTT’s Chief Executive Officer, Justin Nedd noted that generally speaking there are a number of “experts” who express their views freely on social media without any firm basis, and he hoped that Innov8 would help to open the minds of young people to think independently.

“Very often in Guyana, and I have seen this several times, we have many experts but those experts- we really have to ask ourselves: are they really experts or do they have access to the web so they use that access and sometimes  fool the masses,” he said.

Nedd said Guyana is on the verge of a bright future, and that the four-day exposition and business forum aims to showcase technology and inspire youths to be part of Guyana’s growth and development.

“This really is about getting the children involved, opening their minds and giving them a place that they can form thoughts of their own rather than have thoughts of others imposed upon them so this is really for our youth- learn, absorb, ask questions and simply don’t take ‘no’ for an answer,” said the telecoms provider’s CEO.

Top experts from the United Kingdom and Chile were among several who met with President David Granger and a section of his Cabinet to discuss issues about the oil sector. At interactions with the media, two of them separately advised against big spending that could result in a revaluation of the Guyana dollar which would in turn make other exports noncompetitive.