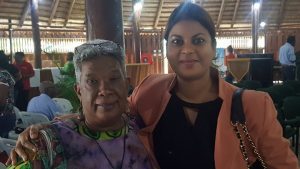 Chairwoman of the Guyana Forestry Commission, Jocelyn Dow and Head of Planning at the GFC, Pradeepa Bholanauth.

The Chairwoman of the Guyana Forestry Commission (GFC), Jocelyn Dow wants to use some of the Norway Funds for the preservation of the country’s standing forests to set up a revolving fund to help small loggers get into value-added production.

“The money that has been earned from our conversation- we believe that some of that money should come directly to forest producers and caretakers so that we can implement a menu of measures to improve livelihoods not just for the rich but for (ordinary) people,” she said.

Dow issued the call on Wednesday, March 21, 2018- International Day of Forests- at an event co-hosted by the Ministry of Natural Resources, GFC, and the Private Sector Commission (PSC).

She later told Demerara Waves Online News that a proposal has been already dispatched to the Ministry of Finance for US$10 million to be set aside to set up the revolving fund. “We have made proposals and we have spoken to the Norwegians and the Private Sector spoke because actually, if you look at comparative interest rates and so on, people who come to Guyana and people who are here- it’s really hard to retool and up-tool and so on if we don’t have money,” she said.

Head of Planning at the GFC, Pradeepa Bholanauth said the first proposal was made in 2015 and so the Ministry of Finance “is looking to see what’s possible” through either the GRIF regional and international financial institutions. “That one (revolving fund) might not work with a budgetary allocation. It might be government negotiating with an existing window to leverage the funds for the sector so that one might have a different modality,” she said.

With Guyana having the lowest rate of deforestation calculated at 0.04 percent,  she said the GFC has asked that some of the cash generated from the Guyana REDD Investment Fund be invested back in forest-dependent communities. “We want to be able to set up a revolving fund to really assist all of our producers to make more of our lumber than to sell it or to export it  as logs, which is one of the things that we have to do to keep current and to keep in the money,” she said.

The GFC Chairwoman hopes that increased household income and improved livelihoods could be garnered from medicinal plants, and craft.

Asked what safeguards would be put in place to ensure the money revolves, Bholanauth said the European Union Forest Law Goverance and Trade Programme would provide Guyana with an opportunity to develop systems for proper governance “to ensure those are satisfied before they do other things”

The GFC Chairwoman said the loans would be tied to their concessions and performance and production targets.

2018-03-24
Denis Chabrol
Previous: No measles outbreak in Region One – Public Health officials
Next: Don’t be “distracted by that tiny, vocal minority” on the oil contract- Business Minister