Waterways must be properly managed for security and be pollution-free, says Granger at World Water Forum 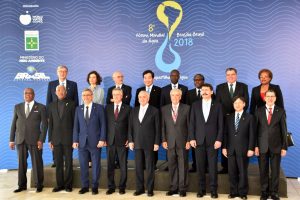 President David Granger (second from left in front row) at the 8th World Water Forum being held in Brasil, Brasilia.

Guyana’s President, David Granger on Monday said waterways running through a number of countries of the Guiana Shield must be properly managed as part of a security mechanism, and that rivers must not be polluted.

He was at the time addressing the 8th World Water Forum in Brasilia, Brazil

“Rivers are important for the security of states. Half of the world’s peoples live in countries, like Guyana and Brazil, which share river boundaries. The management of trans-boundary watercourses must promote cooperation and collaboration rather than confrontation and conflict,” he said.

The Guiana Shield zone includes parts of Brazil, Colombia and all of French Guiana, Guyana, Suriname and parts of Venezuela.

The Guyanese leader also identified the need to prevent river pollution. “Rivers must be protected from pollution, including that caused by environmental degradation and the discharge of effluent from industry, mining and agriculture. River pollution impacts adversely on water quality, on health and the economic and social well-being of citizens,” he said.

Last year April, the Ministry of Natural Resources deployed a team to the gold mining areas of Puruni and Mazaruni to probe reports by the Guyana Human Rights Association (GHRA) of massive pollution. “Te Puruni is a ruinous mess of tailings and devastation along miles of the river’scourse, unnavigable for large stretches; Guyanese gold-mining effluent in the Cuyuni, added to that coming from Venezuela, spews poisoned  yellow effluent into the Essequibo at Bartica in such volume as to discolour large stretches of  this ‘mighty’ river’s Western shores,” the GHRA had said then. 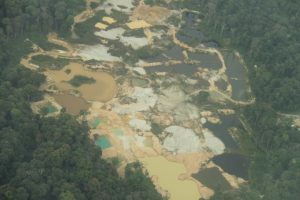 FLASH BACK: Pollution in the Cuyuni River as a result of gold mining

The Guyanese leader in Brazil further remarked that the protection of the sources of the world’s freshwater sources is essential to ensuring citizens’ entitlement to water, communities’ access to safe and sanitary water and countries’ and the continent’s water security.

He added that the Guiana Shield is vital to global water security because it contains 15 percent of the world’s freshwater resources. The rivers of the Guiana Shield discharge an average of 2,792 cubic kilometres of water annually, with one of the highest specific discharge rates for a zone of that size. However, water quality and environmental security are exacerbated due to the adverse effects of climate change such as droughts, flooding, rising sea levels and other extreme weather events.

“The Inter-governmental Panel on Climate Change has forecasted that climate change will result in reduced surface and ground water in most sub-tropical regions… The world’s freshwater supplies, unfortunately, are under threat. Water stress is increasing in many parts of the world. Aquifers are depleted faster than they are replenished. The growth of the world’s population will increase demand for water by 55 percent by the year 2050, placing even further strain on freshwater reserves,” President Granger said.

Meanwhile, in an invited comment, Head of the Department of Environment, Ms. Ndibi Schwiers, who is also attending the Forum, informed that World Water Day 2018, which will be observed on March 22 under the theme, “Nature for Water” will see the launching of the United Nations (UN) Decade of Action on Water.

Guyana, she said, must seize the opportunity to develop water management policies under a single coordinating agency.  “It is important for us to start looking at developing an integrated water resources management policy which is going to enable us to, once and for all, be more aware as to how we should manage our water resources. It is going to enable us to put proper policies in place to develop a more integrated approach to water management,” she was quoted by the Ministry of the Presidency as saying.

Ms. Schwiers further explained that in developing this integrated approach, it is imperative for Guyana to start looking at an evidence base system in managing its water resources; noting that while Guyana may be “the land of many waters”, steps must be taken to put measures in place to protect and conserve its water resources.

The WWF is the world’s largest water-related event, organised every three-years by the World Water Council (WWC), an international organisation an international multistakeholder platform organisation, whose mission is to mobilise action on critical water issues at all levels, including the highest decision-making level, by engaging people in debate and challenging conventional thinking.

The Forum provides a unique platform where the water community and key decision makers can collaborate and make long-term progress on global water challenges and Forum brings together participants from all levels and areas, including politics, multilateral institutions, academia, civil society and the private sector, among others.