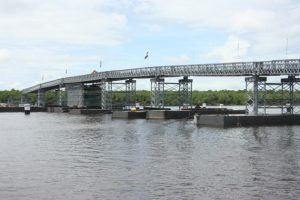 The pontoons on which the Berbice River Bridge floats are deteriorating because they have not been serviced or replaced in the past six years, prominent civil engineer, Bert Carter said.

“You can  expect some amount of deterioration,” he said when asked what could be the condition of the pontoons in the absence a visual inspection.

Fearing that that bridge might collapse, Retired Major General Joseph Singh of The Moray House Trust has volunteered to write the Chairman of the Berbice Bridge Board, Dr. Surendra Persaud to urge authorities to intervene urgently to avoid a collapse or sinking of the bridge.

The Berbice Bridge was opened in December, 2008.

Neither the Chairman of the Berbice Bridge Company, Dr. Persaud nor any member of the Bridge Committee was present at the forum held at Moray House on Camp and Quamina Streets, Georgetown. Singh said they were invited.

Dr. Persaud is also Chairman of the NIS’ board. When Demerara Waves contacted Persaud on Tuesday, he insisted that he would no comment  because the Berbice Bridge is a private company. He suggested that questions be sent to him in writing for consideration by the Board, “but I cannot promise that we will respond”.

The Permanent Secretary of the Ministry of Public Infrastructure, Kenneth Jordan was not immediately available, but sources said government could ask the Berbice Bridge Company for its maintenance schedule to ascertain when last the pontoons were checked, removed, scraped and re-painted.

Carter noted that although none of the shareholders got dividends because the Berbice Bridge Company never made a profit, government’s National Insurance Scheme (NIS), which invested in GY$950 million in preferred bonds have since recouped that investment in December 2015  plus another GY$500 million.

Responding to a suggestion by Valmikki Singh that one of the pontoons should be removed and inspected instead of waiting for the bridge to collapse, Carter said local construction company, INFAB, had estimated that the cost of constructing a jack-up pontoon, dredging the area, removing  pontoon number three, replace it with a reserve pontoon and replacing the serviced pontoon would cost GY$177 million. Valmikki further suggested that one of the spare pontoons be taken to Houston as a “least cost” option for inspection to ascertain what might be the condition of the other pontoons. 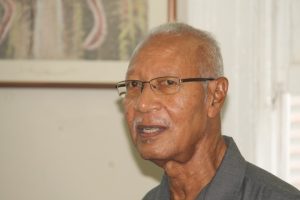 “It’s quite a nightmare when you think about it and then you are not speaking to anybody who is willing to listen and that is the big problem,” he said

Describing the Berbice Bridge as a “political football,” Carter said that government has refused to provide funding or approve an increase in the fares for the loss-making bridge which has so far failed to register an increase in traffic. “The traffic has not increased more than one percent in any one year and we cannot get a ‘raise’ from the government. We applied to the government for a raise in the fare and they say it’s too high already so we can’t raise the fare, we can’t get money from them in the meantime the pontoons are like me- they are getting old and tired,” he said.

Speaking at a public forum held at Moray House, Carter said it would cost GY$78 million alone for return transportation to move the 39 pontoons to a dry dock at Houston, East Bank Demerara to be examined beyond the waterline.  Carter said the servicing of the pontoons could cost US$19 million.

Alternatively, he said a dry-dock facility was designed for  the Berbice Bridge and was estimated to cost GY$61 million. He said that would allow for the movement and hoisting of the pontoons during high tide for sandblasting.

At the same time,  the former Board Director of the Berbice Bridge said the two reserve pontoons that have been on standby since 2012 but “they themselves need to be dry-docked”.Carter remarked that he “retired hurt”  from the Board in November, 2017 because  “the spare pontoons had been in the water since 2012. The jack-up barge was designed since 2015. What (are) we waiting for? for Christmas? And all the time you are hearing you don’t have money, you don’t have this, you don’t have that. I just say to hell with that.” 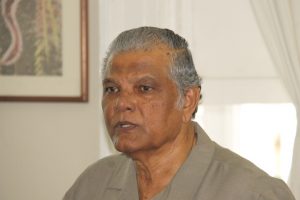 Major General Singh remarked that there was no provision for maintenance of the bridge that was opened in 2008, and ever since the pontoons have missed three three-year cycles  or a maximum of two five year cycles of maintenance.

“The burning issue here is what it is that can be done by the management committee of the bridge in collaboration with other partners including the government of Guyana to assure the travelling public and Guyanese on the whole that this bridge is not going to one day collapse because of the lack of maintenance below the water-line,” Singh said.

The former telecommunications executive  said while it is being said that there is no money, if something happens “I assure you that money will be found and it’s probably going to cost much more in the long-run”. 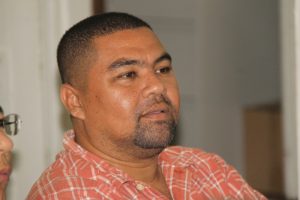 President of the Berbice Chamber of Commerce and Industry, Ryan Alexander

Chairman of the Berbice Chamber of Commerce, Ryan Alexander said the Berbice Bridge is not a member of both the Berbice Chamber and the Private Sector Commission, but he has never heard its representatives raised any concerns about the condition of that crossing. “I am going to take it to the Berbice  River Bridge because I need to find out what is their position and I possibly would have to summon a meeting with them at the Chamber of Commerce and hear what’s going on because definitely it would affect trade in Berbice should that bridge go down,” he said.

Prior to the opening of the Berbice Bridge, ferries were used for passengers and large amounts of cargo to cross that waterway.

2018-03-20
Denis Chabrol
Previous: Waterways must be properly managed for security and be pollution-free, says Granger at World Water Forum
Next: Snow in New York forces cancellation of Fly Jamaica’s flight to JFK