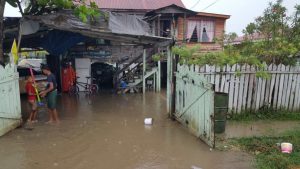 Public Infrastructure Minister, David Patterson urged residents to take the necessary precautions because more high tides are expected. “Take precautions for the rest of the weekend, since the spring tide continues,” he said. 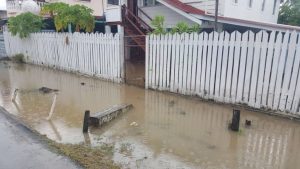 He told Demerara Waves Online News that teams from his ministry and the Civil Defence Commission (CDC) were deployed to the affected villages- Leonora, Uitvlugt and Den Amstel.

He said the Leonora Cottage Hospital has been already drained and protected before the next high tide. “We have already placed sand bags around and cleared it,” Patterson said. 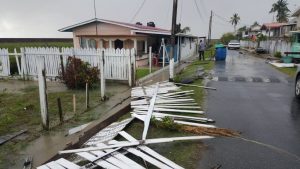 A collapsed fence at one of the flood-affected villages.

Patterson confirmed that the hospital was also inundated by the silt-laden seawater. Homes and businesses located in lower flats were also flooded with several inches of water. 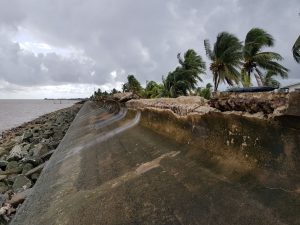 Waves more than 15 feet high were seen slamming the decades-old concrete seawall until a long stretch of it collapsed, worsening the situation for nearby residents and businesses.

About 65 metres of the top of the seawall, he said,  has been broken off at Ocean View, Uitvlugt.  Sandbags are being placed in that area “to stem any further over topping”.

The Public Infrastructure Minister said the affected parts of the villages would be drained by gravity during low tide and pumps.