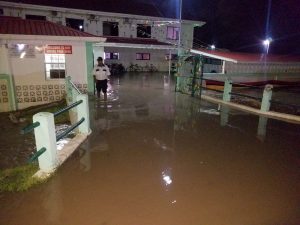 The Leonora Cottage Hospital has been closed temporarily as a result of severe flooding caused by extremely high tides that ripped off a section of the Uitvlugt Seawall, officials said.

Region Three officials and the Minister within the Ministry of Public Health, Dr. Karen Cummings took the decision to temporarily close the Leonora Diagnostic Centre following flooding of the facility’s lower flat.

The hospital is inundated with at least 14 inches of water after extreme high tides overtopped the seawalls in some areas along the West of Demerara Coast (WCD).

Following an assessment by Minister Cummings and the Regional Health Officer, it has been determined that Mildred Cox-Younge Health Centre, also known as the Den Amstel Health Centre, over the next three to seven days will function in place of the Leonora facility, facilitating outpatients as well as emergency cases while the West Demerara Regional Hospital will take the more serious cases.

Senior Health Visitor (ag) at the Health Centre, Bhagpattie Ramnarine pointed out that the health centre’s capacity is adequate to address the needs of the nearby communities, as well as the affected hospital in the interim, while the Leonora diagnostic centre remains closed.

According to Regional Health Officer of Region Three, Ravindra Dudhnauth, the  Mildred Cox-Younge Health Centre has been opened on a 24- hour basis, offering the same services that would have been accessible at Lenora Diagnostic Centre except for x-rays and lab work. Those services, he said, will be diverted to West Demerara Regional Hospital (WDRH).

Minister Cummings, who visited both the Leonora and Den Amstel facilities, said, “I was on spot to see the damage that has been done after the flooding caused by extreme high tides… We were able to mobilise a team – Public Health working with CDC – so we were able to address the situation very quickly.”

Most of the lower flat of the Leonora Diagnostic Centre was affected, including the male and female observation wards, the sterilization room, the Accident and Emergency Unit, the Eye Care Unit and both the old and new health centre units. The operating theatre on the ground floor was unaffected.

Meanwhile, the Civil Defense Commission (CDC) led by Director General (ag) Colonel Kester Craig has been mobilised to render assistance to the staff of the Leonora Diagnostic Centre. The Guyana Fire Service (GFC) has also deployed 51 ranks to assist in the clean-up process at the hospital.

There is another high tide expected which is said to be higher the ones previously experienced. To this end, the CDC has acquired sandbags to fortify the hospital as well as to be distributed to residents along the affected coast to prevent further flooding and damage.