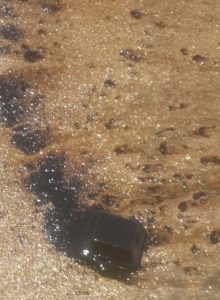 A section of the Kingston seashore, Georgetown coated with the thick, black greasy substance.

Guyana’s Environmental Protection Agency (EPA) is said to be probing the appearance of a thick black substance at the the Kingston seashore ,Georgetown area in the vicinity of the Marriott and Pegasus Hotels, sources said.

A source said the semi-autonomous entity was aware of the phenomenon and that an investigation has since been launched.

The official declined to say what has caused the black discoloration of the water, and said that they were analyzing data.

The EPA, sources said, intends to disclose its findings next week.