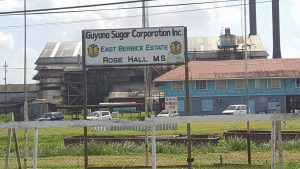 The Special Purpose Unit (SPU) under the National Industrial & Commercial Investments Limited (NICIL), today announced that 100 cane cutters were contracted to harvest sugar cane that is in the field at the former GuySuCo Rose Hall Estate.

Rose Hall is one of the estates shuttered by GuySuCo Management at the end of 2017 and handed over to the SPU for privatization and/or diversification. Initial SPU surveys revealed that GuySuCo had left a sugarcane crop in the ground that was going to be ready for harvesting.

As part of the ongoing collaboration between the SPU and GuySuCo, the SPU said the sugarcane harvested at Rose Hall would be taken to GuySuCo’s Albion factory for crushing. The SPU explained that it took the decision to contract the Albion factory to crush the sugarcane harvested at Rose Hall since it represented a more cost effective and efficient option. “Crushing at Rose Hall would require capital expenditure to restart the factory and, the assembling of a significant workforce.”

The SPU said the cane harvesters, who commenced work this week, are expected to harvest 2,300 hectares. “The SPU will be paying the contracted harvesters and will recoup these funds from the molasses sales afterwards.”

The Rose Hall estate also has 4,300 hectares of sugarcane in the field for the second crop in 2018.