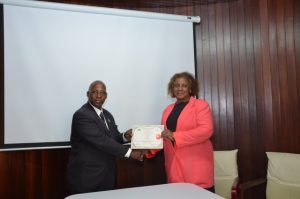 A company closely aligned to the governing coalition was among several granted radio licences on Friday, even as the Guyana National Broadcasting Authority (GNBA) signaled that operators might soon be asked to pay licence fees every three years.

Hoyte-Blackman Television (HBTV),  was one of six entities that were licensed to operate FM stations in the primary zone which stretches from the Abary River in the east to the Essequibo River in the west. HBTV was named in honour of  People’s National Congress Reform (PNCR) Leader, Desmond Hoyte and Dr. Noel Blackman, a former Health Minister under Hoyte’s presidency from 1985 to 1992.

The PNCR is the largest partner in A Partnership for National Unity (APNU) which is in coalition with the Alliance For Change (AFC).

Radio Guyana International, Freedom Radio, and National Television Network (NTN) Radio- all sympathetic to the People’s Progressive Party (PPP) – were among several radio stations that had been licensed by then President Bharrat Jagdeo in 2011.

Many of the new licencees had applied for radio licences several years ago, among them Chandra Narine Sharma who lamented “after twenty years, after twenty years”. Sharma, through his Voice of the People television programme, had been highly critical of the then People’s Progressive Party Civic (PPPC) administration.

CNS-TV6 and HBTV Channel 9 had also not been granted permission by the PPP-led administration to extend their television stations’ reach beyond the current radius.

Sobers said the Authority has been perusing the backlog of applications and considering them. ““Many of these applicants, their applications were lingering for a number of years, and we went through the files and recognized that it is only fit and proper that they be considered, and all things being equal, they have brought themselves into full compliance with the regulations governing the issuance of radio licenses,” said the GNBA Chairman, who is a former magistrate and currently a practicing lawyer.

The Head of the National Frequency Management Unit (NFMU), Valmikki Singh also handed out spectrum licences to allow the radio stations to use designated frequencies on the FM band.

The GNBA in the coming weeks also plans to grant a number of additional FM radio broadcasting licences without resulting in congestion of the FM band especially in the primary zone. ““Well the spectrum in Georgetown in this primary area is limited, and of the limited number of spectrum space we have, we can’t give it all out, something has to be withheld for the future.

So we are going to be approaching very carefully, who else will be getting spectrum space and broadcast license in the primary zones. Look in the secondary and tertiary zones, we have a lot of space, the limitation is only for this primary area,” Sobers told reporters.

While most businesses and a large percentage of Guyana’s population lives in the Primary Zone, experts say operational costs can be very steep with electricity alone costing at least GYD$400,000 per month.

Representatives of the stations that received licences on Friday plan to turn on their transmitters in the first quarter of 2018.