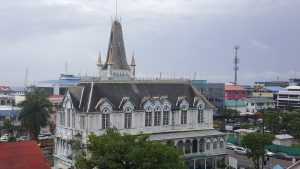 The appeal should be filed by Monday, Town Clerk Royston King said on Friday at City Hall.

Councillor Akeem Peter, Chairman of the negotiating committee, told Demerara Waves Online News that he is in the process of completing a final report which would be submitted at the council’s next statutory meeting.

The High Court in December quashed the by-laws, effectively putting a brake on the system that is intended to generate much needed revenue for the cash-strapped city.

“It is difficult to envisage it going forward at this time without the bylaws,” said NBS’ Attorney-at-Law, Pauline Chase.

Filed by the New Building Society in February 2017, NBS had challenged the legality of the parking meter by-laws that had been approved by Local Government Minister, Ronald Bulkan.

The High Court Judge scrapped the legal validity of Bulkan’s decision to approve the parking meter by bylaws after finding that the procedure to bring the by-laws into force was breached.

Executive member of the Movement Against Parking Meters, Marcel Gaskin welcomed the High Court ruling. “We are very pleased with the decision of the court and this underscores the manner in which City Hall has gone about this project- in a vary haphazard manner,” he told Demerara Waves Online News.

Gaskin vowed that the Movement Against Parking Meters (MAPM) would remain vigilant against any act by City Hall that could see them pushing ahead with the project even before Justice Brassington Reynolds rules in a case against the contract that has been brought by Attorney-at-Law, Kamal Ramkarran. “It (metered parking) has to wait until they can sort out the issue of having valid bylaws and we will remain vigilant to stop them in their tracks,” he said.

Legal experts familiar with the case explained that the judge’s decision does not scrap the parking meter contract between the Mayor and City Council and Smart City Solutions.

The High Court’s decision had come at a time when officials of City Hall and Smart City Solutions were on the brink of inking a new agreement that would provide for a significant reduction in parking meter fees.

In an affidavit, NBS’ Chief Executive Officer, Anil Kishun has said that the notice of intention to apply for approval of the minister of any by-law made under the Act must be published by the Official Gazette not less than 14 days before the application is so made.

Kishun has said in original court papers dating back to February that procedure had not been followed and since the mandatory statutory provisions were not followed and therefore the approval and/or decision of Bulkan to approve the bylaws “is ultra vires, null and void and of no legal effect. It was made unlawfully, unreasonably, without or in excess of jurisdiction and in breach of statute.”

Kishun had also contended that after spending GY$10 million to upgrade an area for parking by customers and employees, the metered parking system had been affecting NBS’ operations by restraining the those persons from gaining access to its establishment without incurring large fees. Those fees, he has said, were in some cases prohibitive or being guilty of a criminal offence which attracts a prison term upon summary conviction.