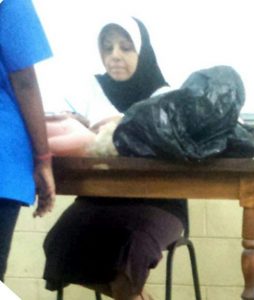 Several persons believed that they have been defrauded by a woman who has for several decades been allegedly setting up bogus medical training institutions in Guyana.

After weeks of asking the woman, who gives her name as Juanna Craig, for details about the unnamed medical school such as its accreditation, she fled Saturday afternoon from Critchlow Labour College (CLC) where classes were being held.

“Things got hot today (Saturday) because since last week some of us in the class had known it was not looking right because every time we ask her questions she is not responding to us and we decided to start asking around,” a student said.

Sources said she has  enrolled almost 30 students. One of them told Demerara Waves Online News that a group of the students went to Brickdam Police Station last week and after a ‘push around’ and being unable to speak with a member of the Fraud Squad, they went to the Alberttown Police Station.

There, according to the student, police told them that they could not take action because they needed evidence from the National Accreditation Council that the woman’s institution is not approved. Demerara Waves Online News confirmed independently that students went to Alberttown Station to seek redress.

The student said the woman denied that she was Juanna Craig who had been previously named in articles as having been allegedly involved in similar scams. She reportedly told the students that she was the person responsible for the programme in Guyana and that the qualifications would be recognised by the “Ministry of Health” in the United States.

The students said after the woman failed to provide satisfactory answers, they found  pictures of her in the local media when she had been implicated similarly in recent years.

The woman has been charging students GY$5,000 for enrolment and monthly tuition fees of GY$12,500 for several courses or programmes in laboratory technology, nursing, dentistry and medical assistance.

Dating back to 1995, a woman bearing several names including Nikita Singh, Geeta Singh, Dr. Kissoon and Dr. Boodhoo has established several fake medical institutions. On each occasion, police and other governmental authorities have been called in. However, after a lull the woman usually resurfaces under a different name.

However, sources at the National Accreditation Council said there is little that can be done at the moment to penalize the woman because the regulations that contain penalties such as closure and fines have not yet been approved by the National Assembly.

The Council, according to sources, has previously turned down her application to operate a medical training facility in Guyana because she is yet to fulfill even one of the 32 standards; the main one being the need to have a proper contract for her place of operation. She will also have to provide details about the qualifications of her tutors before gaining approval from the NAC.