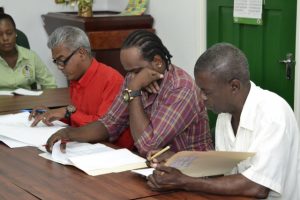 Representatives of the Guyana Power and Light (GPL) management and executive members of National Association of Agricultural, Commercial and Industrial Employees (NAACIE) peruse and sign off the contract entailing the salary increases

After approximately six months, negotiations between the National Association of Agricultural, Commercial and Industrial Employees (NAACIE) and Management of the Guyana Power and Light (GPL) concluded Friday with the parties signing off on salary increases for the power company’s staff who come under the purview of the union.

The salary increase will be retroactive to January 1, 2017. General Secretary of NAACIE, Dawchan Nagasar was quoted by government’s Department of Public Information (DPI) that apart from increases on the actual salaries, there are a number of other incentives that will boost staffers’ finances paid.

“The company and the union has agreed to a 3 percent in scale increments and a 3.5 percent across the board which total 6.5… (There are also increases in) meal allowances, commuters’ allowance for meter readers, night shift premiums and other incentives for persons climbing poles, towers … Also increases and over-time for those working the sick shift and also an agreement for annual performance incentive”, the General Secretary noted.

It was disclosed that another cycle of negotiations will commence soon. Chief Labour Officer of the Ministry of Social Protection, Charles Ogle said, “Don’t let us sign one-year agreements because as you are signing here now, it’s time to start the negotiations. We should look at two years or probably three years. Most people have been going that way, even five years is considered.” 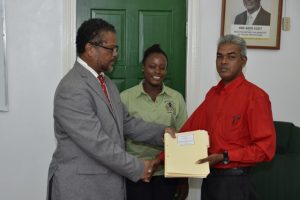 He added that salary negotiations for the GPL staff should begin “the latest, in the second quarter.” Further, it has been noted that throughout the negotiations there has been much back and forth amidst disagreements however both sides were satisfied with the outcome.

Chief Executive Officer (ag) of GPL, Renford Homer added that the level of professionalism that was maintained throughout the negotiations has resulted in both parties coming to an agreement, with hopes of improvement in the coming year.

“With the recognition that we needed to be quite prudent in our deliberation as to what we considered to be a reasonable increase in salaries, and I think that level of maturity and understanding came out of these engagements”, Homer said in closing.