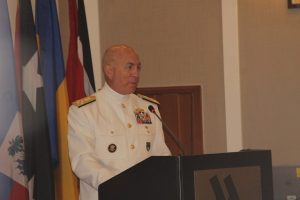 Top military officers from across the Caribbean, North America and Europe are meeting in Guyana to, among other things, hammer out a strategy to address threats by trans-national extremist groups.

Sponsored annually by the United States (US) Southern Command (SOUTHCOM), this year’s Caribbean Nations Security Conference (CANSEC) is being held under the theme of “Unifying Regional Action to Counter Trans-regional and Transnational Threat Networks”.

Head of SOUTHCOM, Admiral Kurt Tidd told the opening session at the Marriott Hotel that the meeting would address the “most pressing security challenges facing us today” through greater linkages and aligning security efforts with work being done by civilian agencies and non-governmental organisations.

“We hope to deny criminal networks sanctuary and freedom of movement. By integrating and sequencing our respective operations and activities, we can sustain pressure against illicit networks and aggregate the impact of individual mitigation and preparation efforts,” he said.

Threat networks are defined as the collective operators, facilitators and enablers that allow criminal organizations and violent extremist groups to operate across borders, continents and hemispheres for profit or to an advance extremist ideology. 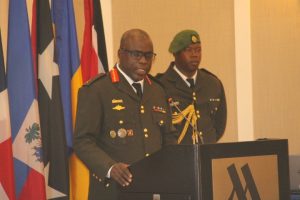 US and other partner nations to build capacity to face threats by organised networks that are involved in the trafficking of drugs, humans and weapons, trading in other illegal commodities. He noted that conflict groups were also being increasingly funded by extreme groups, illicit trades and illegal activities.

Against that background, West called on more developed nations to help  Caribbean nations assist each other to stamp out such illegal activities by organised criminal networks or North American and European countries would remain vulnerable. “Our partners must be committed to strengthening our weaknesses because our vulnerabilities will create challenges for them since we can only provide the gateway for many illegal activities which occur within North America and Europe,” he said.

The GDF Chief of Staff also highlighted the increasing threats by cyber-crime and pave the way for growth and development. “The security forces are, in many instances, way behind the perpetrators of these crimes and we need now, more than ever, to be able to be in step with or ahead of this new level of technological challenge within the region,” he said.

The CANSEC meeting, Admiral Tidd said, is being held at a time when there is volatility, uncertainty and interconnected challenges at a time when new traditional and non-traditional risks are co-existing and reinforcing one another regionally and internationally.

“We see State and non-State actors competing for influencing and challenging democratic values,” he said, adding that extreme weather events was having a far-reaching impact on peoples and their economies.

Admiral Tidd flagged several areas he would like CANSEC to discuss this year include expanding, sustaining and connecting to other networks in new and innovative ways; improving sharing agreements to match challenges; increase collaboration across countries such as areas of expertise, and maximising existing activities and leveraging multinational collaboration platforms.

The SOUTHCOM said the meeting would also examine ways of tapping into the expertise and skills of civil society and the private sector; foster greater cooperation and integration within the Caribbean and other regions.

The top US military officer at the same time hailed the level of cooperation nationally and regionally through organisations such as the Regional Security System, Caribbean Community and the Caribbean Disaster Emergency Management Agency as well as countries such as the United Kingdom, The Netherlands and France.

“This network was born of sustained engagement that emphasise collective active and cooperative solutions. It is built on the foundation of information sharing. It is inclusive and principled, binding together like-minded nations who share common values and a commitment to work together,” Tidd said.

He said the Western Hemisphere was now safer due to years of training, inter-operability and information exchange and rapid response as was the case to the this year’s unprecedented destructive.

The US first assisted the Caribbean in 1954 with its first disaster response in the region.