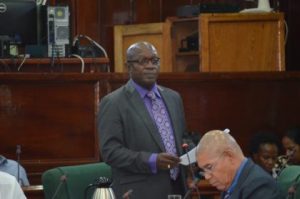 Government parliamentarians on Tuesday defended the decision to scrap the GY$10,000 yearly cash grant to parents that had been provided by the then People’s Progressive Party Civic (PPPC)-led administration, and instead said the provision of free school transportation was more valuable.

President David Granger, since coming to power in May 2015, has been pushing greater access to educational opportunities by among other strategies, the Five Bs initiative- Buses, Boats, Bicycles, Breakfast and Books.

Region Three (West Demerara-Essequibo Islands) parliamentary representative, John Adams said none of the PPPC parliamentarians highlighted the Five Bs initiative while they on Monday criticised the failure of the government to reintroduce the GY$10,000 grant.

Jermaine Figuera in his 2017 budget debate arguments.  He said money has been set aside to purchase another school bus to further improve transportation of school children, “thus reducing the hindrance of acquiring a good education.”

“This is a much better trade-off than the once a year ten thousand grant to the parent. All year round, students would be transported free on time to and from school. Mr. Speaker, when the investment in transportation is costed against the impact of education delivery, no ten thousand (dollar) per child grant from the PPP can withstand the test of time,” he said.