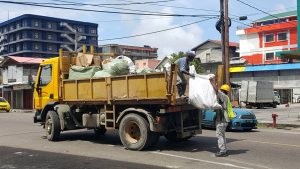 As the City struggles to get its garbage collection system right, plans are in train to bring back the country’s two major waste management companies- Puran’s and Cevons- in combination with other smaller operators and the city’s trucks to remove garbage at a lower cost, a senior City Hall official said Monday.

Speaking with Demerara Waves Online News ahead of a meeting with waste disposal contractors on Tuesday, Head of the Georgetown Municipality’s Solid Waste Department, Walter Naraine said Puran Brothers and Cevons Waste Management Inc would not return “with the same luxury that they had” with five groups each.

The impending talks with the garbage collection contractors would be held less than one month after government announced that it was in negotiations with Puran Brothers and Cevons to clear off an estimated GY$300 million debt dating back to 2015. After those companies had withdrawn their services earlier this year, City Hal had used the opportunity to scrap their contracts and hire small contractors, along with city trucks, to collect garbage once instead of twice weekly.

He disclosed that several of the 15 constituencies would be cleared to allow small contractors to benefit along with Cevon’s and Purans as well as the Solid Waste Department. He added that the City would remove garbage from the municipal markets as well as serve Albouystown and Charlestown that generate a lot of garbage which cost more.

The Director of Solid Waste Management said two of the municipality’s garbage trucks are back in working order while two others are awaiting the arrival of spares that have been already purchased from the manufacturer through a local agent.

He said since the breakdown of the trucks, only Kingston, North-East and East Lapenitence are still to have their garbage collected since last week.

Meanwhile, the Solid Waste Management Department secured the services and open tray trucks of the maintenance and works department to collect waste on Sunday from the commercial district of Georgetown such as Regent Street.

Businesses have been asked to pay for the collection of their commercial and industrial waste.